A day or so ago middle-aged affluent white lady Wendy Bell gave us all some more evidence of her not-so-quiet racism. She did this Facebook broadcasting (as always) from within the confines of the cheaply paneled interior that is the basement of her home.

Pittsburgh’s biggest Karen and Insurrection apologist Wendy Bell doesn’t believe Officer Dunn was called the N-word because she “doesn’t know anyone who uses that word unless it’s a lyric in music”. pic.twitter.com/xfiPzNjg7J

Some context. Officer Dunn is the one on the far right. You'll note that this picture was taken while the officers were being sworn in. (That means they're under oath, Wendy.): 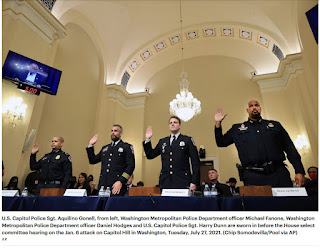 And Rolling Stone has a synopsis of what triggered Wendy the affluent white lady:

Another witness, Officer Harry Dunn with the Capitol Police, testified that rioters called him a n***** after he told them he voted for Biden. “I do my best to keep politics out of my job, but in this circumstance, I responded: ‘Well I voted for Joe Biden. Does my vote not count? Am I nobody?'” Dunn said.

He then said that a woman “in a pink MAGA shirt” yelled back, “You hear that guys? This n***** voted for Joe Biden.”

“No one had ever, ever called me a n***** while wearing the uniform of a Capitol Police officer,” Dunn said.

At about thirty-nine seconds into the above video she gives us this face: 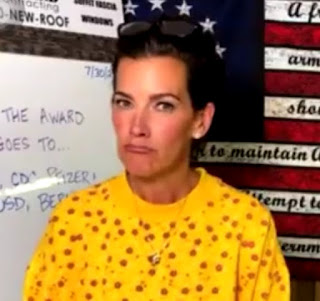 So let me get this straight. They called him an "effing N-."

One, I don't know any who uses that word. Anyone. I just don't. Unless it's a lyric in music. I don't remember the last time I heard anybody in live time say that word, let alone twenty people start chanting it.

So let me see if I get this straight. Wendy Bell is doubting an African-American police officer who's giving sworn testimony to Congress (Isn't perjury a crime? Isn't lying to Congress a crime? She's accusing him of both.) Just because she, an affluent white lady living in a very very nice section of Pittsburgh, says she doesn't know anyone who uses that word (really?). She's accusing Officer Dunn of lying under oath simply because she, an affluent white lady, can't imagine what he described actually happened.