CNN Has The Scott Perry Story (Oh, And Doug Mastriano's Name Shows Up, Too!)

Or you can read about it here:

The report from the Senate Judiciary Committee Democrats zeroes in on Perry as a key player in Trump's attempts to pressure the Justice Department to support his false voter fraud conspiracies, which Trump had hoped would lead to Congress overturning his 2020 loss to Joe Biden. Perry connected Trump with a Justice Department lawyer, Jeffrey Clark, who was open to his claims of voter fraud, while Trump dispatched Perry to try to convince the top DOJ brass that the election had been stolen, according to the committee. 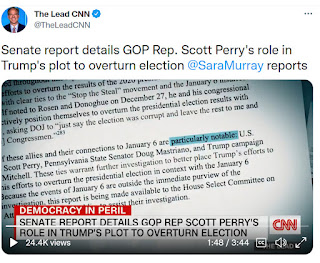 And now the readable:

Perry and the other two officials singled out by the report, Trump campaign legal adviser Cleta Mitchell and Pennsylvania state GOP Rep. Doug Mastriano, could all have firsthand knowledge about Trump's efforts behind the scenes in the lead-up to the January 6 insurrection at the Capitol.
Perry was among roughly a dozen GOP lawmakers whose phone records the committee instructed telecom companies to preserve in August.

I wonder if any of those calls were to Mastriano. I wonder. I wonder if they talked, whether they traded Army stories or just simply coup-cooed late at night.

But back to the Über-patriot Scott Perry:

In the months since January 6, Perry has not backed off his claims that the election results should have been thrown out in Pennsylvania. He also voted against creating an independent commission or a select committee to investigate the January 6 attack on the Capitol, and he was part of a group of nearly two-dozen House Republicans who voted against awarding the Congressional Gold Medal to the officers who defended the Capitol on January 6.

Another is Doug Mastriano.