And these economists are Nobel Prize-winning economists!

So the outcome is as embarrassing as you'd imagine. 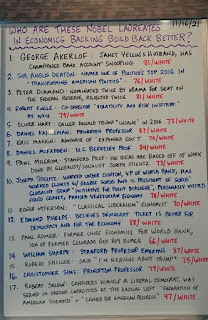 And what was the collective offense of this gang of 17?

For Wendy, it seems the fact that they're all elderly white men invalidates their opinions on economics.

This is a logical fallacy known as an ad hominem attack:

This fallacy occurs when, instead of addressing someone's argument or position, you irrelevantly attack the person or some aspect of the person who is making the argument. The fallacious attack can also be direct to membership in a group or institution.

But what did these 17 say/write that so triggered Wendy Bell's fragile ire?

The American economy appears set for a robust recovery in part due to active government interventions over the past year and a half, including President Biden’s American Rescue Plan. But, reversing years of disinvestment in public goods and addressing the country’s long-term needs—including building toward sustainable and inclusive growth and facilitating our clean energy transition—will require more.

Success in the 21st century will require building upon the bi-partisan infrastructure deal that has passed the Senate, which prioritizes investments in our nation’s “hard” infrastructure. The President’s Build Back Better agenda employs a broader conception of infrastructure by making critical investments in human capital, the care economy, research and development, public education, and more, which will reduce families’ costs.

While we all have different views on the particulars of various economic policies, we believe that key components of this broader agenda are critical—including tax reforms that make our tax system more equitable and that enable our system to raise the additional funds required to facilitate necessary public investments and achieve our collective goals. Because this agenda invests in long-term economic capacity and will enhance the ability of more Americans to participate productively in the economy, it will ease longer-term inflationary pressures.

Um, Wendy? Simply pointing out the age and background of all the people signing this document does nothing to refute anything in that document.

You see that, right?

Had you found one or more Nobel Prize winning economists who've argued against Biden's economic agenda and then stated each argument/counter argument clearly and succinctly, you might have had an intelligent BS board.

On the other hand, these 17 old white guys have 17 Nobel Prizes in Economics and hundreds of years of economic study between them.

So they probably know the subject. My best guess is that you, Wendy, do not.

You know that, right?