How About NOW, Sen Mastriano? Do You STILL Support Donald Trump?

Have you seen this from the NYTimes:

The Justice Department sought a search warrant for former President Donald J. Trump’s residence in Florida after obtaining evidence that highly classified documents were likely concealed and that Mr. Trump’s representatives had falsely claimed all sensitive material had been returned, according to a court filing by the department on Tuesday.

Former president Donald Trump and his advisers repeatedly failed to turn over highly classified government documents even after receiving a subpoena and pledging a “diligent search” had been conducted, leading to an FBI raid of his Florida home that found more than 100 additional classified items, according to a blistering court filing by federal prosecutors late Tuesday.

The filing traces the extraordinary saga of government officials’ repeated efforts to recover sensitive national security papers from Trump’s Mar-a-Lago residence and club, centered on a storage room where prosecutors came to suspect that “government records were likely concealed and removed … and that efforts were likely taken to obstruct the government’s investigation.”

You don't still think that, "we are seeing the justice system being used as a hammer to batter political opponents" do you ?

Maybe you should read the DOJ filing.

In it you'll find this:

And then describing the items seized during an event you described as "the weaponization of America’s tools of justice against political opponents of the current regime in Washington, DC," the DOJ writes:

Pursuant to the above-described search protocols, the government seized thirty-three items of evidence, mostly boxes (hereinafter, the “Seized Evidence”), falling within the scope of Attachment B to the search warrant because they contained documents with classification markings or what otherwise appeared to be government records. Three classified documents that were not located in boxes, but rather were located in the desks in the “45 Office,” were also seized. Per the search warrant protocols discussed above, the seized documents included documents that were collectively stored or found together with documents with classification markings.

Do you still think this is the Democrats weaponizing DOJ?

Then there's this from the Times:

Investigators developed evidence that “government records were likely concealed and removed” from the storage room at Mar-a-Lago after the Justice Department sent Mr. Trump’s office a subpoena for any remaining documents with classified markings. That led prosecutors to conclude that “efforts were likely taken to obstruct the government’s investigation,” the government filing said.

And then in Appendix F there's this image: 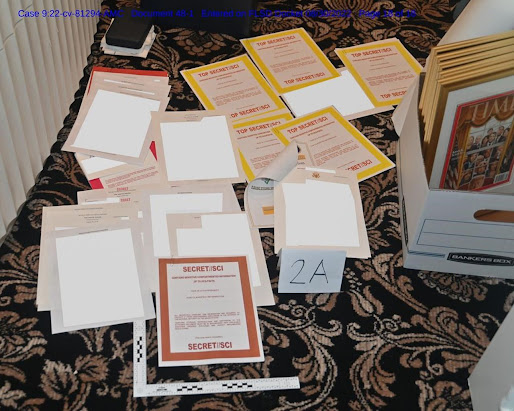 Do you see this part: 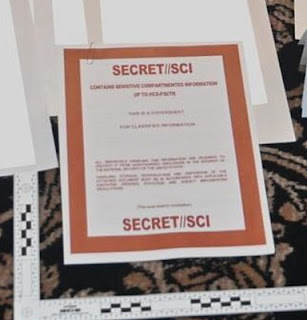 See where it says "SECRET//SCI"?

Surely you, a retired Colonel who had a career in Military Intelligence know what that means.

For the rest of us, there's this:

Sensitive Compartmented Information (SCI) is information about certain intelligence sources and methods and can include information pertaining to sensitive collection systems, analytical processing, and targeting, or which is derived from it. Access to SCI is only granted to individuals who have a need-to-know, have been granted a Top Secret clearance by Personnel Security (PerSec), and are approved by the Department of Commerce’s Intelligence Community granting agency, and only upon completion of a separate Nondisclosure Agreement, the IC Form 4414.

Information that has been determined to be SCI may only be stored and used in a Sensitive Compartmented Information Facility (SCIF). SCIFs have specific construction requirements, and their subsequent accreditation is separate from those for Controlled Areas and is coordinated by the Department’s Special Security Officer (SSO).

And the guy who endorsed you for PA Governor took some of these docuements and tried to keep him for himself.

Are you rethinking your support of Donald Trump? Shouldn't you be?

Because, as your predecessor in the PA Gov race, Sean Parnell, once but it, "If you don't denounce something, you endorse it."

Unless you denounce Trump as the national security threat he is, you're attached at the hip.