In a review of some recent DOJ subpoena news, Talkingpointsmemo includes this:

The overall scope of the probe isn’t really clear at this point, though it seems to have two tracks: Trump’s PAC, Save America, and the fake electors scheme.

Other reports say that the subpoenas are seeking information about speakers at the Jan. 6 rally at the Ellipse, where Trump and others addresses supporters before they broke into the Capitol. Women for America First, the group that organized the rally, received a subpoena.

Hey you remember that Trump/Oz/Mastriano rally of a few days ago in Wilkes-Barre, right?

The rally at Mohegan Sun Arena comes a little more than two months before Election Day in a race where both Oz, the GOP’s Senate nominee, and Mastriano, the party’s gubernatorial nominee, trail their Democratic rivals in polling and fund-raising.

Trump’s Save America PAC announced the rally for “the entire Pennsylvania Trump Ticket,” on Friday.

Greg Sargent at the The Washington Post had this to say about the DOJ subpoenas:

The upstanding folks around Donald Trump have been hit with a wave of new subpoenas in connection with the Justice Department investigation into efforts to overturn the election, the New York Times reports. Some appear aimed at probing his Save America PAC, which raised an enormous pile of cash ostensibly to fight the “stolen” election, then channeled the loot elsewhere.

Save America PAC was part of the Trump/Oz/Mastriano rally on Labor Day.

On the "fake electors" front, we have this:

As they organized the fake elector scheme, lawyers appointed a “point person” in seven states to help organize those electors who were willing to sign their names to false documents. In Pennsylvania, that point person was Douglas V. Mastriano, a proponent of Mr. Trump’s lies of a stolen election who is now the Republican nominee for governor.

CNN has a little more:

The subpoenas seek communications with some of the same players previously identified in subpoenas served to fake electors in various states earlier this year, including former Trump lawyers Rudy Giuliani and Victoria Toensing and Boris Epshteyn, an adviser to Trump's 2020 campaign, among others.

Regarding Women For America First, we have this:

The Uprising has obtained internal documents from the planning of the January 6 “March To Save America” rally at the White House Ellipse that immediately preceded the attack on the U.S. Capitol building.

These documents, which you can read below, include a four page list of 109 “important guests” from at least 18 states. The guests were invited to the rally by the pro-Trump organization Women For America First, which “largely organized” the event. The list also identifies 12 members of the “DC Team” who helped stage the rally. That team included conservative consultants and lobbyists as well as employees for a security firm that worked the rally.

And guess who was among those 109 that WFAF invited as an "important guest"? 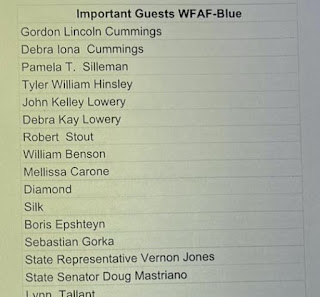 See it? See the name of the St Sen (and now GOP cand. for PA Gov) Doug Mastriano?

The news is reporting that the DOJ is looking into Trump's Save America PAC, the "fake electors" scheme, and Women for America First.

And Doug Mastriano's connected to each of them.

Any comments for the blog, Doug?