The Ravenstahls: He Ain't Heavy, He's My Brother

According to Rich Lord at the P-G:

A seat on the Alcosan board is widely considered a political plum because members have contact with engineering and construction firms that tend to be campaign contributors.

Ravenstahl (Luke, not Adam) had to first toss Dan Keller off the board. Keller recently ran against Ravenstahl (Adam, not Luke).

Additionally, via Tim McNulty at the P-G's Early Returns, we learn that nominating your baby bro to such an appointment is a violation of the City of Pittsburgh Ethics Handbook (special Ravenstal edition here) though apparently a board -- majority appointed by the very same mayor/big bro -- can waive the rule.

Pittsburgh City Council, of course, also has a say in approving board members and I'm certain that we can expect a rigorous review of Ravenstahl's (Adam's, not Luke's) qualifications. 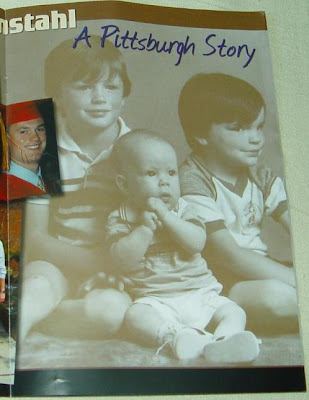 When will city residents learn? If you blindly vote D, you will get this abuse, entitlement and in your face corruption again and again. You think Luke's afraid that you'll vote him out? Too funny.

I'm a lifelong Democrat and I can't stand the stench coming from the city. One party government does not work and, surprise, doesn't really get you Democratic (party platform) results because they answer to no one.

Are you kidding me? Neither Ravenstahl is competent enough to take care of himself, much less qualified to make informed, ethical decisions regarding large amounts of money on technical projects. If Baby Adam had a civil engineering degree and had managed more in his life than a computer and a trash can, the nepotism would only just be tolerable. I can't believe anything this blatantly idiotic happens in a developed economy; I feel like I'm living in Bolivia or Belarus when I pay attention to city politics in PGH.

Kevin, Bolivia nor Belarus would never hold a gridiron place kicker in such high regard. This is a NFL town baby.