Oh, NOW It's The Sunspots!!


Global warming's “pause” over the past decade-plus is an inconvenient truth that blame-mankind, “settled science” climate cluckers struggle to explain. Here's another: Sunspot formation is weakening in ways reminiscent of conditions associated with a “little ice age” about 300 years ago.

The U.K.-based Global Warming Policy Foundation (thegwpf.org) cites an Irish Times report on solar scientists' latest findings. Sunspot activity should be peaking in its regular 11-year cycle, averaging between 90 and 140 sunspots a month, but the actual figure is just 67.

Here's the "report" at the GWPF which is just a repost of this article at the Irish Times.

By the way at the bottom of the GWPF page there's this link which basically debunks story that the braintrust's trying to tell you:


Those hoping that the sun could save us from climate change look set for disappointment. The recent lapse in solar activity is not the beginning of a decades-long absence of sunspots – a dip that might have cooled the climate. Instead, it represents a shorter, less pronounced downturn that happens every century or so.

How interesting that they chose not to tell you that.

But this "sunspot/climbing temps" argument isn't new.  Let me show you something from skepticalscience.com.  It's a set of three pages (one basic, one intermediate, and one advanced) explaining this argument.  But let's go straight to the artwork: 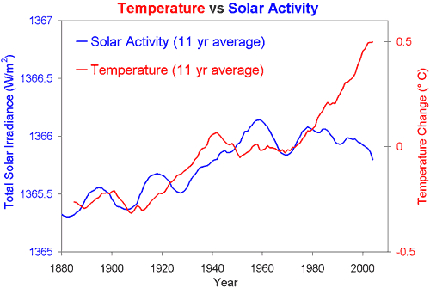 From their "intermediate page" there's lotsa actual science to show how little influence sunspot activity actually has on global temperatures.

The recent disconnect between sunspots and temperature rise isn't new news at all.  Just this data.

Still doesn't change the fact that climate change is undeniable.

If find someone who knows how to solve this puzzle about climate change, how would this man could ask for money to publish it. This is very important to know in order to accelerate solutions to this problem. IDENTIFY THE AMOUNT AND THE PROBLEM WILL BE RESOLVED SOON MANKIND WILL I GET A LOT.