Posted by Dayvoe
From NOAA:

For some context, here's a few charts: 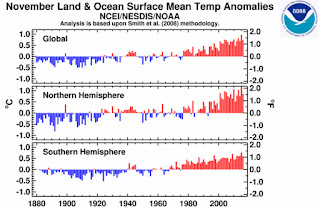 Trump says, however, that this is a hoax.  That it's not really happening.  That it's all a Chinese commie plot to make Amurika less competitive.

Meanwhile, from the Little-handed pussy-grabber's choice for his Environmental Protection Agency there's this:


On climate change policy, which the Obama administration has made a top priority in recent years, Pruitt has consistently denied the scientific consensus on global warming.

"There's a tremendous dispute, as you know, that's going on in the marketplace about how much this global warming trend that the administration talks about, if it's true or not," Pruitt said on a October 2016 episode of "Exploring Energy."

"Is it truly man-made and is this just simply another period of time where the Earth is cooling, increasing in heat? Is it just typical, natural type of occurrences as opposed what the administration says?"

He continued, "What people don't realize is that what the scientists have done is input data into a computer and produced modeling as far as the trajectory of what's going to occur. It's predictive in nature. It's speculative in nature. It's not objectively measured, as far as us knowing for sure what's going to occur. Look, I mean, I think there should be a vigorous debate about that. I mean, I think that ... We ought to have true science. We ought to let science be science and let it educate and inform the policy makers on what should and should not occur."

Um, there already is "true science" - it's found at NOAA (among other places).  And the "vigorous debate" among climate scientists is over - the climate is warming and all the extra greenhouse gasses we've been producing over the last century and a half are to blame.

Meanwhile about those scientists, there's this:


Alarmed that decades of crucial climate measurements could vanish under a hostile Trump administration, scientists have begun a feverish attempt to copy reams of government data onto independent servers in hopes of safeguarding it from any political interference.

The efforts include a “guerrilla archiving” event in Toronto, where experts will copy irreplaceable public data, meetings at the University of Pennsylvania focused on how to download as much federal data as possible in the coming weeks, and a collaboration of scientists and database experts who are compiling an online site to harbor scientific information.