Celebrating Freedom This Fourth Of July

Posted by Dayvoe
This is still in effect, right?


Congress shall make no law respecting an establishment of religion, or prohibiting the free exercise thereof; or abridging the freedom of speech, or of the press; or the right of the people peaceably to assemble, and to petition the Government for a redress of grievances. 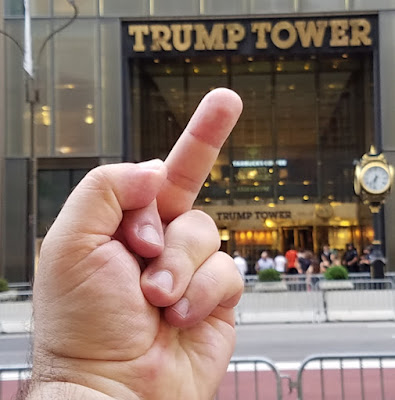 Fuck you, Mr Trump. Fuck You.

Some thoughts from a more patriotic time:


If there is a bedrock principle underlying the First Amendment, it is that the government may not prohibit the expression of an idea simply because society finds the idea itself offensive or disagreeable.


But, above all else, the First Amendment means that government has no power to restrict expression because of its message, its ideas, its subject matter, or its content.

The First Amendment is still in force, right? ICE agents aren't going to deport me (with no due process, of course) to one of Trump's "shit hole countries" because he has a thin skin and simply can't abide anyone one not praising him as devoutly as a starving North Korean farmer, right?

It is New York City. They do not respect the 2nd, 4th and 5th amendments so why would you think they respect the 1st.

Your diatribe rang hollow as the real enemy of the 1st amendment are you and your fellow totalitarian leftists (self named 'progressives'; I read 1984 and am familiar with the bastardization of our language with 'new-speak') like the Democrat party, Black Lives Matter, anti-fa (who really are fascistic in attitude and actions), most public education outlets from pre-school through doctorate level universities, most of the mainstream media outlets (and as King Yul says) et cetera, et cetera, et cetera.

By the way, is your hand photo indicating your Age or your IQ?