Now that grownups are now running the show and science has been elevated to a cabinet level position, I thought it a good idea to return to my monthly NOAA based blogging.

From the scientists at NOAA:

There's even some art: 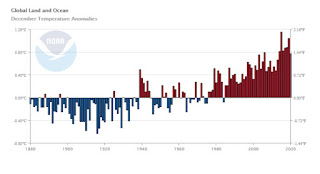 See the red (-ish) columns on the right? That's the global land and ocean temperatures. It's bad and it's going to get worse.

Oh yea, and there's systemic racism strangling the country - Trump had a hand in making that worse, too!