Wendy Bell/Radio Karen Has Returned To The Airwaves! Vetted And Approved By St Barnabas!!

This past Wednesday, Wendy Bell posted this on her Facebook page: 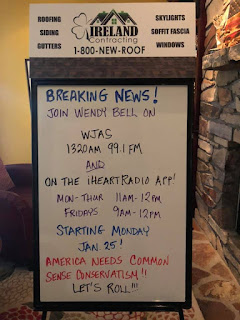 This was followed the next morning by this reporting from Eric Heyl at Patch:

Perhaps he's just being diplomatic but Heyl is too kind to the Angel of Death. She's not "controversial" as much as she's putting the public health in grave danger. (Is there another kind of danger?)

A few hours later, the story was reported by Julia Felton of the Trib:

JD Turco, senior vice president at St. Barnabas Broadcasting, which bought WJAS in November, confirmed Thursday that Bell will be joining the station.

And then a little after that Joshua Axelrod of the P-G:

“We were able to have the have a conversation with Wendy, and we feel it’s mutually beneficial to put her on,” said J.D. Turco, senior vice president of St. Barnabas Health System, which owns WJAS. “We have high hopes for Wendy and for WJAS.”

Mr. Turco, who is also the chief financial officer of St. Barnabas Broadcasting, said Ms. Bell will fit in well with the station’s conservative talk-show format and that she was hired after “considerable thought” regarding her past behavior.

“We can’t predict the future, but we do think we’ve done ample due diligence, and hopefully it’ll all work out,” he said.

Before we go any further, let me point out that while the P-G is more than happy to post what amounts to free advertising for Radio Karen's latest media presence, they passed on reporting about Wendy's recent indefensible doxxing of a private citizen. This is what I wrote about what Wendy did:


Was this included in St Barnabas' "due diligence"? And if it was, why are they going ahead with rewarding Wendy Bell with a 7 kilowatt platform? If not, can it really be called "due diligence"?

Are you like me and wondering what else was part of this "due diligence"? Let's focus with the virus since, y'know, St Barnabas Broadcasting is headquartered in the same building in Gibsonia as St Barnabas Health Care.

September 2, 2020 Wendy Bell lies to her audience with this:

...the CDC says that 94% of people who we think died of COVID did not die from COVID but died and happened to have it at the same time.

This is, of course, a lie - a QAnon inspired lie, to boot! From Factcheck:

He noted that the 6% figure includes cases where COVID-19 was listed as the only cause of death. “That does not mean that someone who has hypertension or diabetes who dies of Covid didn’t die of Covid-19. They did,” Fauci said on ABC’s “Good Morning America.”

And Wendy has reiterated this lie as recently as 3 weeks ago.

Was this part of St Barnabas' "due diligence"? Seems kind of important, lying to the public about CDC statements on Covid-19 fatality. If they knew about it and yet STILL want her on their airwaves, then what does that say about St Barnabas Broadcasting?

We understand what happens with coronavirus. People get sick. But people need to be exposed. We need to all become immune to this thing. Stop saying (she uses air quotes here) we need a vaccine, OK? We have a flu vaccine and only half the people get it. So everyone's going to rush out and get this vaccine? C'mon.

As I wrote back then, she's talking herd immunity without the need for a vaccine. Something she reiterated a few weeks later on July 12. She's talking about the news of 15,000 people testing postive for Covid-19 in Florida when she says:

I think, isn't it the third most populous state in the United States of America? Don't we want this virus to work its way through the people so that we can be immune? So that we can develop some semblance of herd immunity? As we anxiously await the arrival of a vaccine?

The only problem with herd immunity without a vaccine is this from Johns Hopkins Medical School:

To reach herd immunity for COVID-19, likely 70% or more of the population would need to be immune. Without a vaccine, over 200 million Americans would have to get infected before we reach this threshold. Put another way, even if the current pace of the COVID-19 pandemic continues in the United States, we won’t reach herd immunity in 2021. If current daily death rates continue, over half a million Americans would be dead from COVID-19 by that time.

Was this part of St Barnabas' "due diligence"?  Wendy saying "people need to be exposed" so that we can all reach herd immunity (disregarding the massive loss of life that would occur as a result)? Why give someone who believes this any sort of platform at all?

April 8, 2020 Wendy Bell is on a fence. And by "fence" she's talking about an ethical quandary. This one:

[B]ut dollars and cents boil down to, "are you going to bankrupt America and the future for less than one percent of our population, many of whom are already ill? Or aged?"

As I wrote at the time:

Wendy Bell is having trouble deciding between her two options: "bankrupting" America or saving hundreds of thousands (perhaps millions) of American lives - people who are old and frail.

Then there's this wrinkle in the story, this fly in the ointment, this monkey in the wrench:

The data revealed for the first time that the second-worst outbreak at a nursing home in the region in terms of deaths is at one of the best known in the area: St. Barnabas Nursing Home in Richland, which has recorded 31 deaths, the 13th most of any facility in the state.

With 62 positive COVID-19 cases among the 92 residents living in the 152-bed facility — according to online data — the ritzy nonprofit nursing home, known for its two golf courses and ubiquitous television ads featuring former Allegheny County Executive Jim Roddey in his golfing attire, has a fatality rate higher even than Brighton. St. Barnabas has also had 14 cases among its staff.

Yippee Ki Yay, St Barnabas. You need to explain how diligent your "due diligence" was of Wendy Bell. By putting her on your airwaves, you're giving her the opportunity to spread a lot of lies.

I think we're entitled to the truth.