Wendy Bell Crossed A Line Today. (She Doxxed A Critic On Air)

Usually, my critiques of Wendy Bell's Karen-rants focus on her disregard for facts or her questionable morality.

When it comes to her Covid-19 denialism, it's both. She's both factually wrong about the severity of the virus and grossly immoral in her dismissal of that severity. I've called her the "Angel of Death" more than a few times for, among other things, pushing the need for so-called "herd immunity" when it comes to Covid-19 while (willfully?) ignoring the vast numbers of Americans the virus would kill in the meantime.

This is absolutely morally reprehensible.

Today, however, she crossed a big line.

Of course in her telling, the host of Radio Karen is the victim. This is what you'll find at her Facebook page:

With little or no mention of what she did to violate said "standards," Wendy snowflaked herself to Trump-level victimhood.

So what DID she do?

Here's the story. Wendy Bell has sponsors and an otherwise concerned citizen called one of those sponsors, in this case a company called "Sierra Experts" (who can be reached at at 412 379-8333, by the way) and left this message:

Hello, I'm calling on behalf of a number of people who are going to start boycotting anyone who sponsors Wendy Bell. Um, we didn't know about Sierra Experts but the fact that you do sponsor Wendy Bell, who is full of hate speech and actually helped incite the riots at the Capitol yesterday, puts you on a bad list that a lot of people are going to avoid. We are going to do our level best to educate people about that. Please remove yourself from sponsoring Wendy Bell. She is full of hate speech and she is part of the reason violence was incited at the Capitol yesterday. Thank you.

And so what did the freedom loving common sense conservatives at Sierra Experts do with this voice mail?

Wendy Bell herself explained on the now-blocked facebook video:

That woman left, what she thought was an anonymous phone call at my advertisers. Well, my advertisers are really smart people. And they don't like it when people they don't know, who aren't customers of theirs, try to browbeat them into submission to join "Joe Biden's America." So one of my advertisers managed to unravel the no-caller ID private line blocked number and I got to see the number.

So my team did a reverse search, found out who the woman was, did some digging, found some audio of her, did a cross reference check of the audio. You gotta make sure who you're talking about if you're gonna go on and say, "This is what's going on here."

Wendy Bell found a picture of the woman and showed it to her vast adoring audience. On her BS board, she'd written the woman's name, phone number, work place and, according to my buddy Jon, coiner of the term "Radio Karen," told her listeners to harass the woman who called Sierra Experts (who, by the way, can be reached at 412 378-8333). 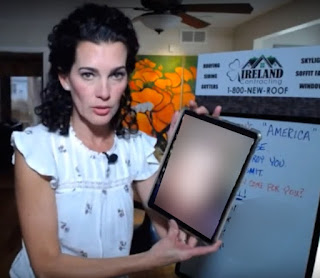 Surely this is illegal somehow. Isn't this cyber bullying?

In any case, Wendy Bell crossed a line today. Up until today, she was just another fired for being a racist ignorant conservative blow hard.

But from now on, she's also a complete fucking asshole.