No, Yesterday Was NOT a Protest. It WAS Domestic Terrorism. 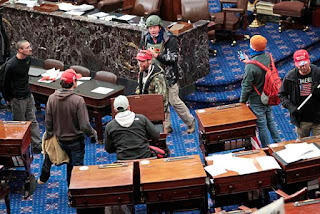 This was domestic terrorism - aided and abetted by Donald J Trump.

This is the result of populist passions stoked for more than four years by Trump and his enablers in the media and and in the government. This is the end result of a political movement nurtured by endless manipulations of the truth by those enablers.

...fight to ensure that only legal votes were counted. While this represents the end of the greatest first term in presidential history, it’s only the beginning of our fight to Make America Great Again!”

Yes, of course he does. And that's probably why you don't see the word "concede" in that statement.

But complicity and responsibility are not the same thing. Donald Trump is responsible for yesterday. And he should be tried and convicted to the fullest extent of the law.

Lock HIM up. Now.