Radio Karen host Wendy Bell was in Harrisburg yesterday as you can see from her Facebook Page: 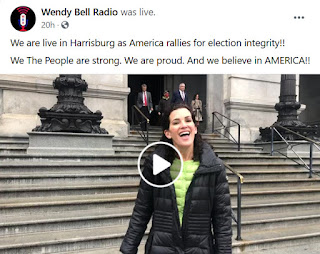 And yet, this is what happened inside:

The new session of the Pennsylvania Senate got off to a chaotic start Tuesday, with Republicans refusing to seat a Democratic senator whose election victory has been certified by state officials.

[Democratic State Sen. Jim] Brewster narrowly won reelection over Republican challenger Nicole Ziccarelli, who is asking a federal judge to throw out the election results. At the center of that legal dispute are several hundred mail ballots that lacked a handwritten date on an outer envelope, as required by state law. The Pennsylvania Supreme Court allowed those ballots to be counted, which gave Brewster the edge in the race.

Republicans are usually the reliable "states' rights!" crowd. But, as usual, when it's necessary to get what they want, they run to the feds.

And don't think, even for a minute, that Wendy was at the capital to defend Brewster's win.

Election integrity? I don't think so.