This was the first thing Wendy said on today's video:

Wendy Bell got booted from Facebook, at least temporarily.

But I really don't care about that. What I care about happened about 12 and a half minutes into her show this morning. She was talking about the Trump-ist coup attempt this week when she says:

I think it's important for us to identify, too, who also showed up at the rally at The Capitol on Wednesday. Because we're all being told it's a bunch of derelict, deranged, rabid Trump supporters. Do you know who went? people who love America. And what happened was that love for America was purposely on schedule bought and paid for, hijacked by the left.

After some throat clearing admitting that "some Trump people" were, in fact, there, she says:

But I want you to see this video. I think it's important, right? Because it's taken by a man on January 6 who recorded some video that's pretty important.

She then shows a video clip from this guy: 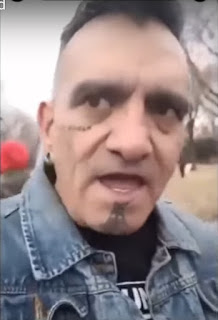 Pretty unique looking guy, right? I mean no disrespect here but there aren't a lot of guys who look like this, am I right?

On the video, the denim clad gentleman is talking about how the police have escorted in some Antifa shuttle buses "right here. Front and center."

A few seconds later, someone else on the video exclaims:

Having "proven" that antifa was there at the riot in DC on January 6, Wendy returns to the screen, smirking triumphant as she says:

Because Wendy has a problem with the video. You see, she broadcast it today, January 8, at about 11am (eastern standard time).  Too bad Wendy Bell, teller of all things Trump-troothful, failed to read this piece from Reuters dated January 6. That's two days ago, by the way.

The first paragraph from Reuters:

Posts on social media make the claim that the Washington D.C. Police “escorted Antifa” into the U.S. capital ahead of the January 6 protests. A spokeswoman for the D.C.’s Metropolitan Police Department (MPD) told Reuters this assertion is false. As evidence, some iterations feature a mislabeled video that has been circulating since at least Dec. 5, 2020, allegedly showing St. Paul, Minnesota not Washington D.C.

Reuters linked to a number of sources of the video. This is one of them. Here's a screen capture: 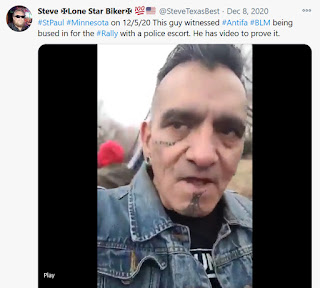 Do you see your problem, Wendy? See the time stamp?

It's from December 6, Wendy. That's a little more than a month ago, Wendy. It wasn't at the Trump-fluffed DC insurrection, Wendy.

There aren't enough words in the English frickin language to describe how wrong you are about this. It's simply a failure of colossal proportions. You know that, right? 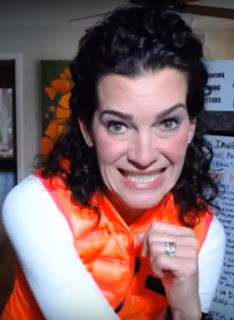