Pennsylvania State Senator Doug Mastriano Is IN THE NEWS About His Involvement In DC Jan 6.

First, the news. From KDKA:

A Republican state senator who was on the scene when a violent mob of fellow Donald Trump supporters commandeered the U.S. Capitol should resign, the top Democrat in the Pennsylvania Senate said Thursday.

Minority Leader Jay Costa, D-Allegheny, said Sen. Doug Mastriano’s words and actions since November encouraged a coup attempt and inspired the people behind it. At least eight other Senate Democrats have said Mastriano should step down.

And something a little different from USA Today (by way of the York Daily News):

A day later, he traveled on the bus trip he organized to a "Save America Rally" that turned into an insurrection at the U.S. Capitol on Wednesday, when four people died, 14 police officers were injured and 68 rioters were arrested.

Mastriano, a Republican from Franklin County, said he was not part of the mob that stormed the Capitol, smashing windows, vandalizing offices and reigning terror over the people's house.

But state Democrats are calling for his resignation and removal from office.

You noted the phrase "bus trip he organized" right?

Mastriano made a statement on his Facebook page denouncing the violence and asserting that once he realized that the protest was turning violent, he left. He doesn't mention any "bus trip he organized" in the video, however.

So perhaps that part's just so much fake news, right?

And perhaps it isn't. Perhaps State Senator Mastriano is leaving out a few crucial bits of information in his denunciation of the violence. Let's go find out, shall we?

We'll begin our journey at The Western Journal, in a piece dated January 1:

Many thousands are expected to gather in Washington, D.C., on Wednesday to show their support for President Donald Trump and pressure Congress not to certify the Electoral College vote making Joe Biden the official winner of the 2020 election.

“We the People must take to the US Capitol lawn and steps and tell Congress #DoNotCertify on #JAN6! Congress cannot certify this fraudulent Electoral College,” the event organizers’ website, WildProtest.com, reads.

A few sentences down there's this:

Among the featured speakers scheduled for the rally, which starts at 10 a.m. at the Capitol, are Republicans Rep. Paul Gosar of Arizona, Representatives-elect Majorie Greene of Georgia and Lauren Boebert of Colorado, state Rep. Mark Finchem of Arizona, state Sen. Doug Mastriano of Pennsylvania and Democratic state Rep. Vernon Jones of Georgia.[Emphasis added.]

Maybe The Western Journal got it wrong. We'll need to dig deeper.

Were you to click on that link, you'd find an empty screen that's wiped clean, nothing to be seen, you know what I mean, jelly bean?

If you chose instead to load that URL into the Way Back Machine you'd find a capture of the page (this one is time stamped on January 6, by the way). Evidently, it was set up by the "Stop The Steal" folks.

Text on that page reads (in part):

We the People must take to the US Capitol lawn and steps and tell Congress #DoNotCertify on #JAN6! Congress cannot certify this fraudulent Electoral College. Our presence in Washington D.C. will let Members of Congress know that we stand with Rep. Mo Brooks and his colleagues in the House of Representatives who will bravely object to the certification of the Electoral College.

With these words from Trump:

The page also has a list of "Invited Speakers & Featured Guests" for that day's rally including:

And most importantly (for this story, at least): 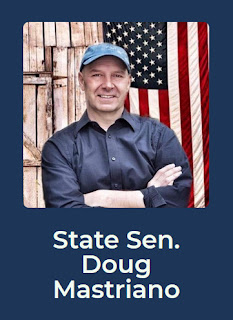 Yep. That's right. Doug Mastriano was listed as a "Invited Speaker & Featured Guest" on a website set up by "Stop The Steal" though the website doesn't offer any information as to what exactly that means.

Did he speak at the rally? If he didn't speak, what was he doing there for the Stop The Steal folks? Was he handing out out complimentary hot chocolate and MAGA mittens?

The website doesn't offer any answers but maybe shouldn't someone maybe, oh I don't know, ASK STATE SENATOR DOUG MASTRIANO ABOUT THIS??

Because it certainly looks like his involvement runs a little deeper than just someone who was there.