Yesterday, the Covid-denying anti-vaxxer Wendy Bell offered up some more or less clear evidence that she's sailed farther out onto Crazie-lake than was previously known. 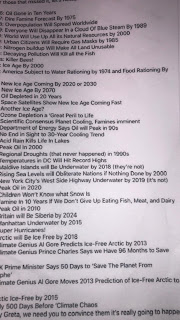 And she described it thusly:

The next time you’re told to be afraid of an impending climate catastrophe… Just remind yourself of these delicious headlines. Yes, these headlines actually ran in newspapers

As has been shown time and time again at this blog, Wendy Bell's research skills are, let's just say, close to non-existent. So it's hardly a surprise to learn that she did not compile this list herself.

The list can be found at the AEI in September of 2019 in a piece that references even earlier "research" from climate deniers Myron Ebell and Stephen Milloy.

Let's take a look at that first heading - described by crack researcher Wendy Bell as one of the "headlines actually ran in newspapers."

Click on the link to that "headline" in the AEI piece and it eventually leads you to this AP piece in 1966. Note, please, the headline as it's not what Wendy said it was:

The piece describes an address given to a group of businessmen by a man who was the head of a "consulting drilling geologic drilling company" and head of the American Association of Petroleum Geologists. He's also talking about US oil reserves, not the worldwide oil supply.

As it says nothing about the climate, why is it evidence for how scientists have gotten climate predictions wrong?

And that's just the first on this messy messy poorly researched list.

Meanwhile, the scientists over at NASA are on record as saying:

Multiple studies published in peer-reviewed scientific journals1 show that 97 percent or more of actively publishing climate scientists agree*: Climate-warming trends over the past century are extremely likely due to human activities. In addition, most of the leading scientific organizations worldwide have issued public statements endorsing this position. The following is a partial list of these organizations, along with links to their published statements and a selection of related resources.

And more than a decade ago the scientists over at NOAA said:

A comprehensive review of key climate indicators confirms the world is warming and the past decade was the warmest on record. More than 300 scientists from 48 countries analyzed data on 37 climate indicators, including sea ice, glaciers and air temperatures. A more detailed review of 10 of these indicators, selected because they are clearly and directly related to surface temperatures, all tell the same story: global warming is undeniable. [Emphasis added.]

The science is solid. Wendy Bell's research is shoddy.