But Wait. I Thought That Wendy Bell Was An Award Winning Journalist!

WOW! She has done it again! Another huge scoop for @WendyBellPgh! She has DONE HER RESEARCH and is understandably outraged that Biden is going to withhold benefits from unvaccinated veterans!

She refers us to DelewareOhioNews dot com! Let’s look into them after the video…1/2 pic.twitter.com/0m3yV0sITJ

The clip (thanks Jon!) starts with Wendy reading a headline:

She then dutifully references the source of this material (since she always gives out the truth and she always tells you where she got it, right??):

The article is here, actually. And Wendy reads the first sentence of the piece:

A few minutes later this happened:

Now watch as @facebook’s favorite disinformation queen and her co-host Brick realize they’re caught (by her own viewers) spreading satire as real news. See the Queen of Research calculate how to come out of it & think she still has credibility. The faux concern & outrage. Yikes. pic.twitter.com/zD3CTbABDc

After Brock says that folks on-line are telling them it's "parodies" Wendy says, "Alright, we'll come out and say that."

I hope it's satire. That would be terrible. It better be satire. I sure hope it is. You know that is one segment you can't fiddle with. I can't imagine he would do that. But I could.

So even though they're told it's fake, they still believe it's possible as it still fits their narrative.

Wendy used to be an award winning journalist. Isn't it part of the education of journalists to verify sources? To make sure that what they're telling their audience is actually, you know, credible?

On that front, Wendy and Brock failed miserably.

Here's the thing. As Jon points out (and thanks, again, Jon!) with this image from the website's front page: 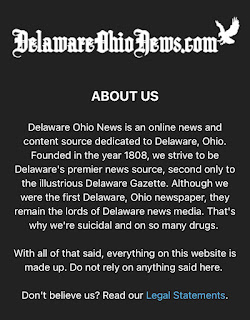 How did Wendy Bell, award winning journalist, not see this? Did she not bother checking? Or was she so interested in smearing The President that she didn't care what the truth was?

All she had to do was to read the bio posted of the writer posted at the bottom of piece she spewed out to her many adorings:

Ricardo Paye is a Senior Correspondent with Delaware Ohio News. Born and raised in the Delaware County Fairgrounds, he's a reporter with a deep knowledge of the streets who isn't afraid to ask tough questions. His fondest childhood memory is getting a hand job from a public utility worker in the basement of Pilsner's 5 & Dime store. He holds a bachelor's degree in Euthanasia from Ohio Wesleyan University.

Wendy, how could you have missed this?

Wendy and Sidekick Brock failed on yet another front: This isn't even a new story.

USAToday debunked it more 40 days ago on September 16:

President Joe Biden recently announced vaccination requirements for federal workers and companies with more than 100 employees, as COVID-19 cases continue to surge due to the highly contagious delta variant.

As Republican governors and commentators criticized the new vaccine mandate, some took to social media to claim Biden also ordered the Department of Veterans Affairs to withhold health benefits from veterans who are unvaccinated.

"Biden Orders VA to withhold Health Benefits From Unvaccinated Veterans," reads the headline of an article that was shared to Facebook on Sept. 13 in a post with more than 300 interactions in three days.

Another user shared the same screenshot to Instagram and claimed Biden said, "As with so many other things in our country, veterans are part of the problem when they should be part of the solution."

But Biden never said this, and he is not withholding health benefits from unvaccinated veterans. The claim started as satire and was shared to social media as if it were factual.

Politifact had this on September 14.

Heck, Disabled Veterans [dot] org had it then, too.

So including USAToday, hat's one-two-three-four, count 'em four fact checks from more than a month ago, Wendy. And you missed (or ignored) each one of them.

I hope you just missed them. That would be even more terrible if you knew about them and ignored the truth just to smear the administration. It better be ignorance and not dishonesty. I sure hope it is. You know that is one thing (truth) you can't fiddle with. I can't imagine you would do that.

Wendy, feel free to respond to this via email (or twitter) I'll put you on once a week, if you'd like. I think I could even give you a percentage of my sponsorship $$. Would you like that?