Again, with the VAERS data: 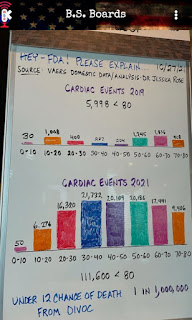 Wendy, honey, sweetie, apple of my eye, anytime you're using the VAERS data to point anyone away from the vaccine, you're putting their health at risk.

And that expert you're using? Dr Jessica Rose?

Yea, she's not the most reliable source now is she?

Take a look at this from Reuters:

An article widely shared on social media claims more than 150,000 people have died from COVID-19 vaccines. The U.S. Food and Drug Administration (FDA) told Reuters this claim is inaccurate and based on misinterpreted data.

The article, published on Sept. 22 on a website known for spreading misinformation (here and here), claims scientists concluded through an “in-depth analysis” that “at least 150,000 Americans have been killed”.

The website credits the findings to Jessica Rose, who was a postdoctoral researcher in biology at the Israel Institute of Technology from 2016-20, according to her resume posted online (here). She is now a self-described independent researcher.

The blog article cites a paper titled: “Estimating the number of COVID vaccine deaths in America” (here), which Rose co-authored alongside Mathew Crawford, a statistician (here). Both appear to be members of a group questioning COVID-19 vaccines (here).

Here's Reuters on that paper:

Rose and Crawford’s paper calculates a so-called “underreporting rate” of adverse reactions by comparing data submitted to VAERS on anaphylaxis (severe allergic reaction) after vaccination with estimates of people vaccinated in the United States. They then subtract the average number of background deaths for previous years from the deaths after vaccination reported to VAERS before multiplying the resulting number by their estimated underreporting rate. They say these calculations produce an estimated total of more than 150,000 people who have died in the United States as a result of COVID-19 vaccines.

An FDA spokesperson told Reuters in an email that it “strongly disagrees” with the analysis put forth in the report.

They added that the claim 150,000 people have died in the United States as a result of COVID-19 vaccines is not accurate and is based on data from VAERS that was not properly interpreted.

This was published on October 4, a little more than 3 weeks ago. Did you see it? Did you (or your sidekick Brock) even bother to look for it? A journalist would have. Someone interested in getting at the truth would have.

Evidently, you didn't. Or you did and you chose not to tell your many adorings.

And Wendy, had you checked you would've had an answer to the top line of your Bullshit Board:

From the Reuters Fact Check:

The spokesperson said: “Although under reporting is a limitation in VAERS, with regard to COVID-19 vaccine safety monitoring, there currently is not evidence to suggest it would underestimate the amount of COVID-19 vaccine-related deaths to such a large degree.”

The FDA and CDC have multiple systems in place in addition to VAERS to monitor vaccine safety. “A review of available clinical information, including death certificates, autopsy, and medical records, has not established a causal link to COVID-19 vaccines,” the FDA told Reuters.

False. COVID-19 vaccines are safe and there is no evidence to suggest they have caused more than 150,000 deaths. The claim is based on misinterpreted data.

Anytime you point anyone away from the vaccines, you're putting their health at risk. Some of them will get sick. Some of those may even die. That's on you.