Doug Mastriano Made It Onto The Late Show With Stephen Colbert!

It's so good to see that St Sen (and now GOP cand. for PA Gov) Doug Mastriano has hit the big time!

Moving over to politics, the midterms are right around the corner, and one candidate not doing so well is: 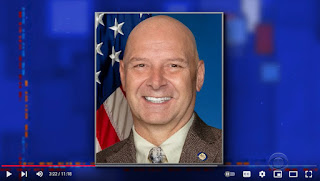 Pennsylvania republican nominee and egg with dentures, Doug Mastriano. Mastriano is struggling in the polls in part because, according to political scientists, he sucks.

Among other things, among the ways that he sucks, he attended the January 6th riot, has a long-standing association with Christian Nationalist ideas, proposed charging women who violate an abortion ban with murder, is connected to a social media site run by a notorious antisemite, and was photographed wearing a Confederate uniform.

Because, historically, nothing projects "winner" like a Confederate soldier in Pennsylvania.

Case in point: this weekend now it's tanking. He held what he promised would be a "big rally," but ended up looking like this: 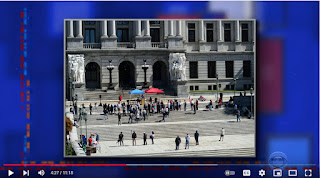 Not a great sign when your rally has more stairs than people.

He's also been wildly out raised by millions of dollars, and he seems to be getting desperate, because yesterday on Facebook, his campaign shared this picture, declaring "Days of Fasting and Prayer."

"Until I am elected governor, I will not eat or pay my rent."

Of course, by fasting for days, Mastriano is following in the footsteps of Jesus, which makes sense. Because Jesus was also never Governor of Pennsylvania.

Very true. Jesus never was the Governor of Pennsylvania.