Yes, Things ARE That Bad In The Mastriano Fasting Campaign

Pennsylvania Republican Doug Mastriano may be down in polls in his bid to become governor, but intends to fast and pray for the 40 days leading up to the midterm elections.

Mastriano's campaign posted Monday on Facebook that the candidate intended to start fasting Thursday, "interceding for our elections, our state and our nation."

The notice includes a Bible quote from Isaiah 58:12 reading, "Then you will be known as a rebuilder of walls and a restorer of homes."

Actually, Newsweek has it wrong.  According to this Facebook page, it's obvious that St Sen (and now GOP cand for PA Gov) Doug Mastriano is inviting his followers to fast. Take a look: 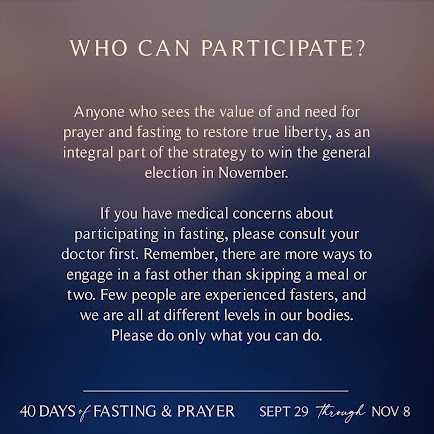 See? The plan isn't for just Doug to fast, but for his followers (those who can, of course) to fast as well.

Can we call this a cult, yet?

The next image lays out the reasons why Doug wants his followers to follow him into the fast: 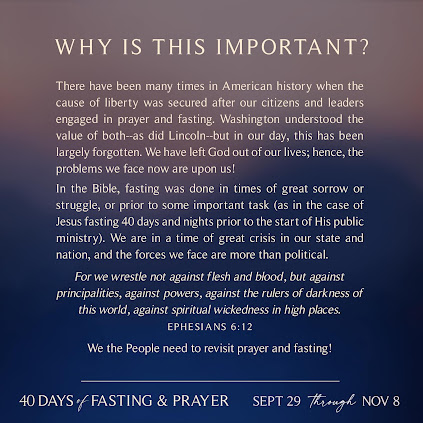 And about that reference from Ephesians 6:12 (the "spiritual wickedness in high places") just who do you think Doug's followers think he's referring to?

BTW, did you know what's in Ephesians 6 immediately preceding the above scripture? This:

5 Slaves, obey your earthly masters with respect and fear, and with sincerity of heart, just as you would obey Christ. 6 Obey them not only to win their favor when their eye is on you, but as slaves of Christ, doing the will of God from your heart. 7 Serve wholeheartedly, as if you were serving the Lord, not people, 8 because you know that the Lord will reward each one for whatever good they do, whether they are slave or free.

9 And masters, treat your slaves in the same way. Do not threaten them, since you know that he who is both their Master and yours is in heaven, and there is no favoritism with him.

Anyway, The Inteligencer has the low down on the Mastriano campaign:

This year, several are contending for the title of “worst candidate in a competitive state,” but none has a political death wish quite like Pennsylvania Republican gubernatorial nominee Doug Mastriano, whose underwhelming campaign and background of almost comically numerous extremist connections have made Democratic attorney general Josh Shapiro a strong favorite in the governor’s race despite the Keystone State’s evenly divided electorate.

Wow. And that's just one sentence.