A few weeks ago, this happened:

Gubernatorial candidate Doug Mastriano has been in violation of a U.S. Army policy that governs how political candidates can use photographs of themselves in uniform — a situation he took steps to rectify last week and again Monday, as the Army reached out following a 90.5 WESA inquiry about the images.

And until last week, both the Twitter and social media accounts were headed up with profile pictures of Mastriano in military gear. The Facebook page showed him in dress uniform and beret, while the Twitter account showed him in fatigues.

Those images were replaced last week with images of Mastriano in civilian gear, after WESA queried military authorities about whether Mastriano was in violation of military regulations.

“The Army contacted Mr. Mastriano’s campaign staff and advised them of the rules for imagery use contained within the DoD Directive and Army Regulation” after the WESA query, confirmed Army spokesman Matthew Leonard.

But then what are we to make of the photo that accompanies this P-G article? 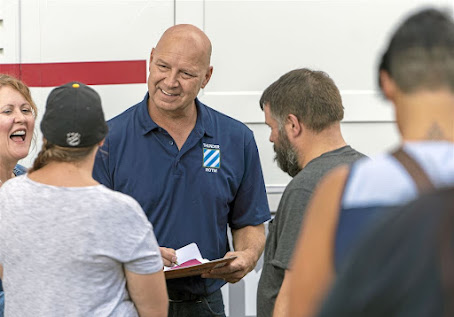 Yes, he's not in uniform, but what's up with that logo on his shirt? 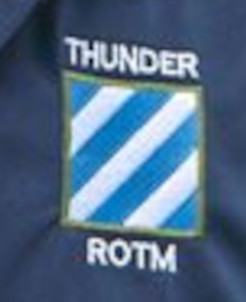 "ROTM" stands for "Rock of the Marne" and it's the nickname the 3rd Infantry Division:

After being activated for World War I the 3rd Infantry Division, which was known as the “3rd Division” at the time, found itself on the Marne River in France, fighting the Germans. The battle was anything but easy, but they persevered. The division’s soldiers set up a defensive position along the Marne River, which helped them beat German offensives. The nickname is an allusion to their resiliency.

And the pattern of blue and white diagonal stripes is the division's shoulder patch.

The 3rd Infantry Division is also where Doug served for a few years:

1986 Commissioned as an officer in the United States Army

Retired as Colonel in the United States Army

Yes, he's not wearing a uniform but he is dog-whistling his service to those who can hear it just the same.