A county official in New Mexico who was convicted of entering a restricted area during the Jan. 6 riot at the U.S. Capitol must be immediately removed from office for his involvement in an insurrection, a judge decided Tuesday.

District Court Judge Francis Mathew ruled that Couy Griffin, an Otero County commissioner, is now disqualified from holding public office because he violated Section 3 of the Fourteenth Amendment by participating in the Jan. 6 siege.

"He took an oath to support the Constitution of the United States ... [and then] engaged in that insurrection after taking his oath," Judge Mathew wrote.

Lots, as they say, to unpack (and apply locally) here.

But let's start with the 14th Amendment. NPR's link above gets us the text:

No person shall be a Senator or Representative in Congress, or elector of President and Vice-President, or hold any office, civil or military, under the United States, or under any State, who, having previously taken an oath, as a member of Congress, or as an officer of the United States, or as a member of any State legislature, or as an executive or judicial officer of any State, to support the Constitution of the United States, shall have engaged in insurrection or rebellion against the same, or given aid or comfort to the enemies thereof. But Congress may by a vote of two-thirds of each House, remove such disability. [Emphases added.]

And now this is the oath that St Sen (and now GOP cand. for PA Gov) Doug Mastriano took when joining the Pennsylvania State Senate:

And here is evidence of Doug (and his wife, BTW) walking very close to The Capitol on January 6. He's in the yellow box: 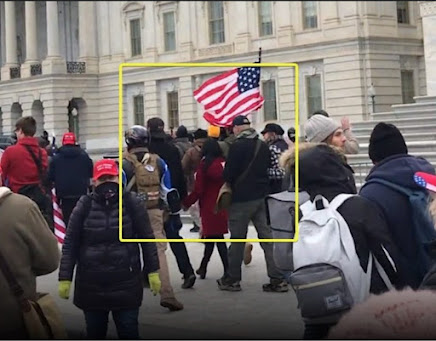 This is after Doug (and his wife, BTW) crossed the barricades.

Now let's take a look at some of the passages of the ruling against Couy Griffin, that "Cowboys for Trump" guy:

Next paragraph from the ruling:

Mr. Griffin aided the insurrection even though he did not personally engage in violence. By joining the mob and trespassing on restricted Capitol grounds, Mr. Griffin contributed to delaying Congress's election-certification proceedings. The constitutionally- mandated proceedings could not resume until all members of the mob, including Mr. Griffin, were removed from the restricted area. (p. 36)

I realize that there's no evidence of Doug Mastriano (or his wife, BTW) actually entering The Capitol building. Nor has there been (to my knowledge, at least) any legal action taken against either for trespassing on the Capitol grounds.

But just knowing that someone somewhere was barred from office (by way of the 14th Amendment) for participating in Trump's attempted coup warms my heart because I know it could (might not, probably not but it could) happen here.

Bottom line: State Senator Doug Mastriano violated his oath of office by participating in Donald Trump's extra-legal plan to remain in office after losing the 2020 election to President Joe Biden.

And as such, he does not deserve to hold any public office anywhere ever again.