Yes, we all know that this happened this past week:

While the rally was organized to bolster [Dr. Mehmet] Oz and Doug Mastriano, the GOP’s hard-line nominee for governor of Pennsylvania, it was Trump’s first rally since the FBI’s search of his Mar-a-Lago club, and Trump spent part of the evening railing against it.

He called it “one of the most shocking abuses of power by any administration in American history” and “a travesty of justice.”

And this was St Sen (and now GOP cand. for PA Gov) Doug Mastriano's statement about the raid:

The raid on Mar-a-Lago was an unprecedented assault on the fundamental norms of the American legal system and represents an outrageous weaponization of America’s tools of justice against political opponents of the current regime in Washington, DC.

And on numerous times I've asked whether, in light of new allegations (and there are always new allegations), Doug would like to, you know, put some distance between himself and the twice-impeached coup-plotter.

A document describing a foreign government’s military defenses, including its nuclear capabilities, was found by FBI agents who searched former president Donald Trump’s Mar-a-Lago residence and private club last month, according to people familiar with the matter, underscoring concerns among U.S. intelligence officials about classified material stashed in the Florida property.

Some of the seized documents detail top-secret U.S. operations so closely guarded that many senior national security officials are kept in the dark about them. Only the president, some members of his Cabinet or a near-Cabinet-level official could authorize other government officials to know details of these special-access programs, according to people familiar with the search, who spoke on the condition of anonymity to describe sensitive details of an ongoing investigation.

Documents about such highly classified operations require special clearances on a need-to-know basis, not just top-secret clearance. Some special-access programs can have as few as a couple dozen government personnel authorized to know of an operation’s existence. Records that deal with such programs are kept under lock and key, almost always in a secure compartmented information facility, with a designated control officer to keep careful tabs on their location.

But such documents were stored at Mar-a-Lago, with uncertain security, more than 18 months after Trump left the White House.

Now we all know Doug spent years in military intelligence. He has to know the importance of document security. We've also reminded him about the sensitivity of those SCIF rooms.

Will this be enough for Doug to say bye-bye to his best buddy Trump? I doubt it.

We received yet more details Friday on the FBI’s search of Mar-a-Lago. One immediately stood out: According to the newly released inventory list, agents seized 48 folders bearing classified banners but which were nonetheless empty.

One box contained 43 such empty folders, while two other boxes contained two, and another contained one.

The new detail is tantalizing for a host of reasons, including that the separation of classified documents from their folders is something the National Archives has previously described as being “of most significant concern.”

So there's absolutely positively no reason to think that any evidence of any Mar-a-Lago based NATSEC breach will tear Doug away from his guy. They're stuck together like a stamp on a letter. Like birds of a feather, they stick together. 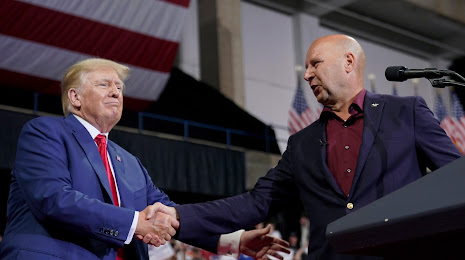