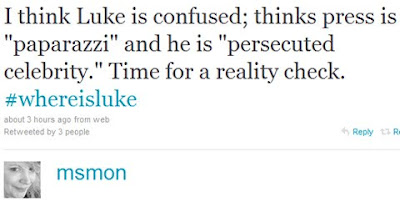 Shame on news reporters using Church as a source without first confirming it with two other sources. Isn't that how it's supposed to go? Or are we still stuck with printing with reckless abandonment?

Virginia, however slight, may have a point. Is it that we the public should have known where he was because he is a public official, or is it that his staff should have told her where he was? What exactly was the problem?

It seems to me his staff knew where he was--"in the city," but not disclosing it to Virginia. Maybe other things took priorities, that he couldn't go to the funeral--Specter didn't . . .

The office publishes a public schedule everyday. Why not that day? Why was it a closed schedule when he was doing official city business?

If his staff was clueless as to his whereabouts, then that is an altogether different problem. And if pics surface of a mardi gras shin dig, then thats a bigger problem.

I think the mistrust of the mayor is the fact that he hides the truth, whatever the truth is. If he would just come out and say what it is he's doing, people would be okay with it or not okay with it, and would give him the space he needed to blow off some steam for his 30th birthday, or for his divorce, or for being a fuck head.

The reporters would somewhat leave it alone, bloggers wouldn't make such a fuss because he would be respected for being himself.

But instead, he's off sneaking around and the rumors we all hear (yes, we ALL hear them) become more than just rumors. It takes on a life of its own.

In this particular situation, it was more than just bloggers asking where the Mayor was. I mean, I realize that if I call the Mayor's office and demand to speak to him or even ask where he is, his staff will offer to schedule an appointment next week or something. But this was a) Councilman Bill Peduto and b) reporters from local TV and newspapers asking where the Mayor was. And they were doing so in the context of the question of who was authorized to sign the extension of the declaration of a state of emergency due to snow, involving real money for the City.

Regardless of whether his staff knew specifically or even generally where he was, in this case the Mayor was obliged to let Council know where he was. That is, of course a comment on my part and not real news (heh).

This is simple. He works for us and we have a right to know what he's doing and where he is -- short of knowing when he's in the Men's Room, puking his guts out. Which may be accurate...

Luke is a total, complete embarrassment. His response to the fact that someone died (due to the utter incompetence of his employees...) was to use it as a bargaining chip in his complaints about "the media." Clearly he figures, "everyone hates the media," so he thought he could skate by scapegoating them.

But it didn't work.

The current pole on the P-G's site (not scientific...) shows that most respondent's believe the Mayor should indeed fess up.

Those of us on these boards aren't surprised by any of this, of course. We saw it coming right from the start.

Whether the "Give the kid a chance" dipwads in Pittsburgh will now "get it," remains to be seen...

Maybe he threw a temper tantrum so that we'd all talk about that instead of talking about how a man died partially due to his fault of not clearing the roads?

Maria, that (the death) and als distract us from discussing the cost of the condo at Seven Springs. Or rather speculating since he refused to divulge that.

If only the Mayor would ask himself, when he was about to go do something, "would I feel comfortable telling my mom about this a week from now".