Reiland Gets It Wrong. Again.

Posted by Dayvoe
I was too late to blog on this yesterday. As they say (and they DO say this, don't they?) no time like the present.

I've blogged on Ralph Reiland before and it's pretty safe to say he's in his element at the Pittsburgh Tribune-Review.

"The overhyped tea party phenomenon is more about symbolism and screaming than anything else. A 'movement' that encompasses gun nuts, tax protesters, devotees of the gold standard, Sarah Palin, insurance company lobbyists, 'constitutionalists' who have not read the Constitution, Medicare recipients who oppose government-run health care, crazy 'birthers' who claim President Obama was born in another country, a contingent of outright racists (come on, people, let's be real) and a bunch of fat-cat professional politicians pretending to be 'outsiders' is not a coherent intellectual or political force."

Then he goes about to debunk (or so he thinks) Robinson's generalization.

First by saying that he was at a local tea-party rally and it didn't resemble at all what Robinson wrote. Hmm - do you see the logic error there? It's pretty obvious, as he's comparing a specific event to a generalization about a great deal of events. Now if Robinson was talking about the specific rally Reiland attended, Reiland might be onto something. But as it is, this is completely beside the point.

Then Reiland pulls out a old chestnut of a wingnut argument:

Second, one could hardly say that the "tea party phenomenon" has been "overhyped," except in a negative way by the mainstream media and by establishment politicians. Right from the start, Nancy Pelosi warned that tea partyers were Nazis because she saw a picture of a swastika at an event.

Except that she didn't refer to "tea partyers as Nazis" did she? Here's what Newsmax.com (hardly a liberal voice) said in August.

To a question about the legitimacy of the opposition to health care reform:

“I think they are Astroturf . . . you be the judge,” Pelosi answered. “They’re carrying swastikas and symbols like that to a town meeting on healthcare.”

As we pointed out last August when we discussed this image from one of last summer's health care protests: 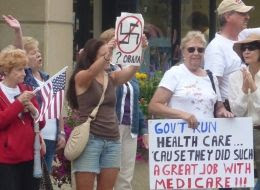 By crossing out the swastika, what do you think the protester was saying? She was protesting against what she saw as Nazism - in the health care plan. She was calling the plan Nazism.

And what do you think Reiland does? He does the same thing:

There were a few swastikas and Hitler pictures (plus some occasional pictures of hammers and sickles and Lenin and Che), but those were anti-Nazi, anti-totalitarian and anti-communist expressions -- examples of the threat to individual liberty from overblown government and overreaching politicians.

Take a close look. He's saying the protests were warning of some coming Nazi threat. It's the overblown government and overreaching politicians who are acting like Nazis. People like Nancy Pelosi and Barack Obama. But in wingnut world that means that Pelosi was calling protestors Nazis.

But Reiland really blows his wad on this:

On the "birther" part, that's not my issue. But if it was me and millions of people thought I was a foreign interloper, a pinko from Kenya, I'd just produce the original birth certificate.

Sorry Ralph. But that makes you a birther.

In the end Ralph Reiland projects his own logical inadequacies onto Eugene Robinson:

Robinson concludes by saying that "American public opinion seems to have become an unguided Weapon of Mass Suspicion." In fact, that's exactly what Robinson has done in his ridiculing of the tea party movement. He's allowed his suspicions to distort his objectivity and destroy his credibility.

Given everything above, whose objectivity is distorted and whose credibility has been destroyed?

Pulitzer winner Eugene Robinson
And Duke Lacrosse Rape hoax believer.
Sorry Ralph. But that makes you a birther.
Progressives consider me to be a birther because I want to see Obama's College transcripts and Long form Birth Certificate.

Ahh, HTTT, bringing up an unrelated topic yet once again.

And of course you should be entitled to dictate to the State and people of Hawaii what information they have to release directly into your hands to satisfy your curiosity about who the nurse was at Obama's birth. Because the laws that apply to everyone else in Hawaii shouldn't apply to a bla-, er obvoius foreigner like Obama.

Meanwhile you and Reiland both miss the point. When Reiland says that four out five Americans don't trust the government to solve their problems, he probably means because of the last year. But I think maybe they mean the previous eight years, when Bush lied to us about WMD's in Iraq, and when he and his fellow Republicans allowed the housing bubble to escalate into the worst financial crisis of the last thirty years, perhaps the last eighty years, and in fact kept the Democrats from fixing the problems before it occurred.

But you go right on trying to distract us with non sequitors.