Meet Carl Paladino. He's the Tea-Party-backed Republican candidate for governor of New York. You can see from his campaign website masthead above that he's "for the people," but if you read his emails you'll see he's not for all the people.

WNYmedia obtained dozens of emails either sent by Paladino or forwarded by him that contain outrageous racism, hardcore pornography and bestiality. 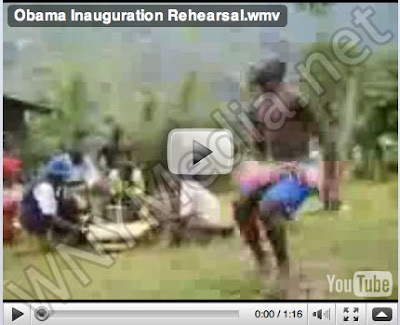 (This is only a snapshot of the video as the original has been
banned from YouTube. It shows African tribesmen
dancing (get it!). WNYmedia notes that it was popular at
the skinhead website Stormfront.org. You may recall
that cop-killer RichardPoplawski kept an account there.) 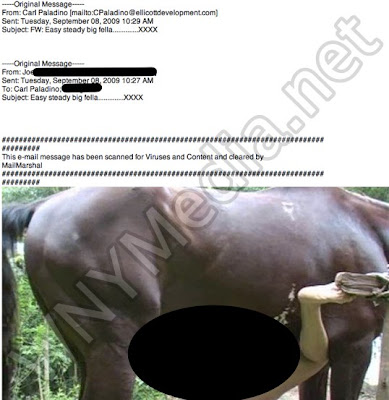 (This one needs no comment. He also sent an email
embedded with a video entitled “Miss France 2008 fucking”)
According to Talking Points Memo:

Paladino's campaign manager, Michael Caputo, would not comment on specific emails, but acknowledged to TPMmuckraker that Paladino had sent emails that were "off-color" and "politically incorrect," saying that few such emails represented the candidate's own opinion. Caputo accused Democrats of wanting to change the subject from substantive issues to "having sex with horses."

It should come as no surprise to anyone that Paladino is anti choice and anti same-sex marriage. Also, according to TPM, Paladino considers himself "the only Republican in the race who agrees 100 percent with conservative values." (OK, you can stop laughing/weeping now.)

Additionally WNYmedia notes, he "even counted Governor Paterson’s admitted affair as evidence of Albany corruption – until the media found out about his own extramarital affair and child birthed out of wedlock."

Apropos of nothing, The Pittsburgh Tea Party Movement will hold its second annual Tax Day Tea Party on April 15th in Mellon Square Park and the Southwest PA T.E.A. Party will hold their "Let It Begin Here!" tea party on Saturday April 17th at the Greensburg-Jeannette Regional Airport. (Hey, guys! Never let it be said that I ignore your events.)

And the South Hills Pittsburgh "Coffee Party" will have a meeting on Sunday the 25th at the Panera in the Galleria (on Washington Rd, in their meeting room) at 4:00pm. They will be discussing campaign finance reform, and possibly working on a video with different Coffee Party members reading parts of one bill aimed at public financing of Congressional elections.

Which is a communist plot, by the way.

We are an nonprofit representing the Azerbaijani-American community, and are trying to do research on health care, taxation and social security issues. Basically, through our research, we are overwhelmed with tons of information, and in order to be able to clearly and concisely formulate the choices to our members, we would be very interested in seeing some one-pagers outlining the pro's and con's on these topics. It would be also interesting to see what are other similar nonprofits thinking and doing. Being a grassroots organization, with a diverse membership, we need to be able to "keep it short" and easy to understand for busy people who don't particularly like or enjoy politics. If you have some tips, pointers and such information, could you please email it to me directly , or via our website www.USAzeris.org