Get out your hankies, Right Wing, Keith Olbermann is back on Tuesday 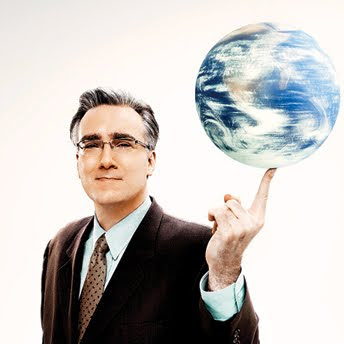 Well, that was quick.

MSNBC suspended Keith Olbermann without pay on Friday and will have him back on the air Tuesday.

As many know, MSNBC said that they suspended Olbermann allegedly due to his contributions to Democratic political candidates which violates NBC's rules for journalists -- despite Olbermann fronting an opinion show. (The rule also does not apply to NBC's owners.)

When it came out that other MSNBC hosts/personalities including Joe Scarborough and Pat Buchanan had donated to Republican candidates without any apparent retribution, then the story became that Olbermann was suspended for not asking for permission to contribute.

Now Politico has reported that MSNBC really suspended Olbermann because he wouldn't do an on-air mea culpa for his donations.

Of course, as MSNBC host Rachel Maddow pointed out on her own show on Friday, the whole controversy just demonstrates the difference between FOX News and MSNBC where the former not only allows their "news" people to donate freely to political campaigns but does actual on-air fundraising for GOP candidates.

The Progressive Change Campaign Committee (PCCC) got 300,000 signatures (including mine) on their online petition to put Olbermann back on the air. You can sign their welcome back card here. 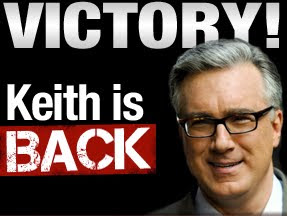 Looks like MSNBC host "Rip ‘n’ Read" Rachel Maddow is full of it.
She overlooks MSNBC contributors Harold Ford Jr and Howard Dean.
In addition to fundraising by her co-worker host Ed Schultz.
The Phony 'Journalism' of Rachel Maddow
Maddow hones in on Sarah Palin for her contributions and endorsements, inexplicably referring to her as a ‘Fox News host’. In fact, Palin is a contributor at FNC, just as Harold Ford Jr is a contributor at MSNBC. You know Mr Ford. He’s the guy who gave thousands to Dick Durbin (D), Barbara Boxer (D), Jack Conway (D), Kirsten Gillibrand (D), Steny Hoyer (D), and several other (D) candidates in the 2009-2010 cycle. Rachel gave him a pass, but to be fair, how could she have known? Media Matters didn’t tell her. Not to mention Howard Dean, contributor on CNBC who also serves as an analyst on MSNBC. He’s been busy raising money all over the place.

Woah.. both viewers will now have something to view.

While that's kinda funny, what's NOT funny is that PMSNBC pays him.. $7 MILLION a year! ROFLMAO