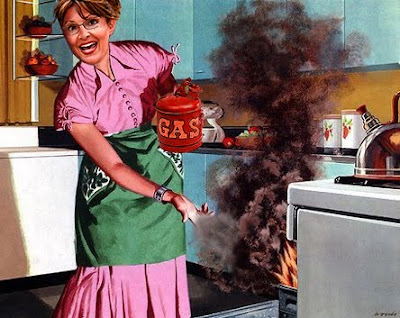 Palin baking up a big ol' mess of BS
Via Politico:

Palin brought dozens of cookies to a speech at the Plumstead Christian School in Plumsteadville, Pa., amid news reports — since retracted — that Pennsylvania’s State Board of Education is looking at ways to limit sweets at classroom parties.

Palin called the plan an example of the “nanny state run amok” and said that she brought the cookies in order to “shake things up," according to news outlets including WPVI-TV.

One guess which "news report" Politico points to for inaccurate reporting about supposed mandates. Can you say Trib? I guess this really should be David's story...

I don't know about you, but I've certainly heard of schools already encouraging parents to being in healthy treats.
.

In my world, healthy and treat are (generally) mutually exclusive terms. And whether that cake thing has any basis in fact, the idea that "kids should eat healthy treats" is really up to the parents and the kids. I don't want schools encouraging unhealthy choices, but I also don't want them taking on the role of dietary overseers. At this point, they can barely educate kids, so let's focus on that, okay?

The truth is that WE ALL ATE CAKE and didn't all end up as porkers. The problem of obesity has much more to do with a lack of exercise and poor overall diet -- not the occasional Twinkie. It also has to do with a suburban lifestyle that doesn't allow children to play at-will. Hell, the "nanny state" is, to my way of thinking, more about the hovering parents and soccer-on-a-schedule than anything. Where I live, I see almost NO bikes all summer, even though the streets are flat, the traffic is low and the houses are close together. The kids are all inside with overdeveloped thumbs and underdeveloped gluts....

As to Ms. Palin? I would hope someone might ask her; "Isn't there something more important you should be talking about?"

The interesting part is that the original reporting (by Jodi Weigand) has been scrubbed from the Trib's website, as far as I can tell.

If I am wrong about that I will gladly issue a correction BUT I WILL LEAVE MY MISTAKEN COMMENT UP AS A RECORD OF MY MAKING A MISTAKE.

Luckily, google has a cache file of the article:

Pilt, I agree with your assessment, but the problem is that electronic entertainment and electronic work life has ruined us. You are absolutely right about hovering parents, but the news media has managed to generate a sense of fear in parents (to generate ratings) that it is hard to blame them. We certainly need to encourage the schools to retain and expand their athletics programs (some local school apparently have a few weeks of PE, and might eliminate them altogether).

But meanwhile, in a world where the processed foods are the cheapest (compared to fruits and fresh vegetables), we need the schools to help educate kids about what foods are healthy and “wholesome”. I have to say I would support the schools putting even rigid guidelines on the baked goods that get sent to school (maybe not so much the type as how often).

The funny thing about this story is that it sure sounds like the school Palin went to was a church school? The Pennsylvania State Board of Education would have considerably less influence over them. I would think they would be the schools least likely to listen to the State about nutrition. But why let reality get in the way of a good scare?

I'm not in favor of what San Francisco did with banning happy meals because I think it's government over reach. But some guidelines on food available in schools is long overdue.

Have you looked at a school cafeteria menu recently? It's stuffed full of fried food, burgers, hit dogs, pizza, etc. It's all carbs, bad fat and calories. I was shocked when i saw what was being offered.

Blue#Too, Salon dot com linked to a story in Reason (which I guess is libertarian) about school food: http://reason.com/blog/2010/07/14/lunch-in-government-cafeterias?utm_source=feedburner&utm_medium=feed&utm_campaign=Feed%3A+reason%2FHitandRun+%28Reason+Online+-+Hit+%26+Run+Blog%29

Personally I would not include carbs per se as part of a list of bad food ingredients. But of course refined flour (versus whole grain) and simple sugars (versus the sugars in fruits) are legitimate targets. We might look at portion sizes as well, especially if we talk about a deep dish pizza loaded with cheese and pepperoni.

Also personally, after what I have read and seen about factory farms, I would make school lunches vegetarian, with lots of tofu tucked inside whole grain lasagna and less processed cheese. But I will say that's just me.

Part of the problem is that the media distorted what was in the DoE's nutrituional guidelines. It was a suggestion, not a mandate that schools combine birthday parties, and consider restricting children to a single sugary treat per party. But the message gets distorted by the media, so I wind up arguing with a colleague at work who told me he heard on the news that "The state isn't going to allow cookies in the cafateria for dessert." I had to print out the guidelines from the state's website, and show him that what he "thought" he heard on the news or read in the paper simply didn't jibe with reality.