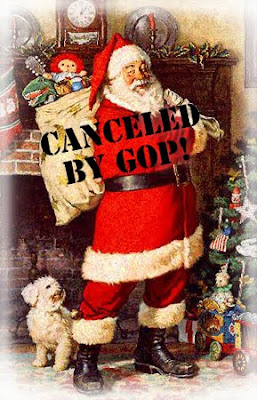 Republicans hate Christmas. They hate it so much that they don't want millions of Americans to be able to celebrate it. No toy train for little Johnny. No pretty dolly for sweet Sue. No Christmas turkey or ham. No Christmas lights. Maybe they think because Santa wears red and has a beard that he's a Communist.

There's no other conclusion to draw.

By voting no to extend emergency unemployment to millions of Americans during the holiday season at the same time that they refuse to extend tax cuts to millions more middle class Americans (unless they can give themselves huge tax breaks) they are saying no to holiday cheer and waging war on Christmas.

Instead of kids writing a letter to Santa this year, they need to write to Congress and ask them why they want St. Nick to skip their house.

[If Democrats can't sell this they don't deserve to be in office.]
.

With all due respect, you're missing the point.

They just sit there, waiting for their guv'ment hand out when there are many many MANY jobs out there, just waiting to be filled! Rush said so!

Why should I have to pay for someone else's toy train when I work and they simply refuse to??

For reasons I can't comprehend, or rather, prefer to not waste my time comprehending, I was recently unable to receive unemployment compensation. My quick understanding is that because I worked for a few months, and during those few months I made less than a certain cut off, I cannot now receive unemployment. Which is fine with me, but silly. If I understand the rules correctly, I'd have been better off not working during that period.

All in all, the impetus to remain employed in a volatile trade (machinist) in a relatively volatile business period has panned out well for me. As I bounced from one layoff to the next, I rapid gained new skills, which lead to higher wages. I have recently been offered employment in what may well turn out to be the most satisfying and interesting position I have ever held.

So, playing the market for what it's worth is the ticket, in my mind. Certainly it's a time of uncertainty, but that very condition of labor market can make for a benefit if you allow it. Most immigrants I've known make good wages, usually as self employed individuals, and seem to view unemployment compensation askance.

What Rush said aside, it is quite true, in my humble opinion, that these periods of economic turmoil are at once a needed correction and an opportunity for the working man. Perhaps we're removing too much of the incentive to take some risk.

Perhaps we're removing too much of the incentive to take some risk.

Yes, removing risks worked out so well for the banks.