Who knew I was standing so close to the Muslim Brotherhood? 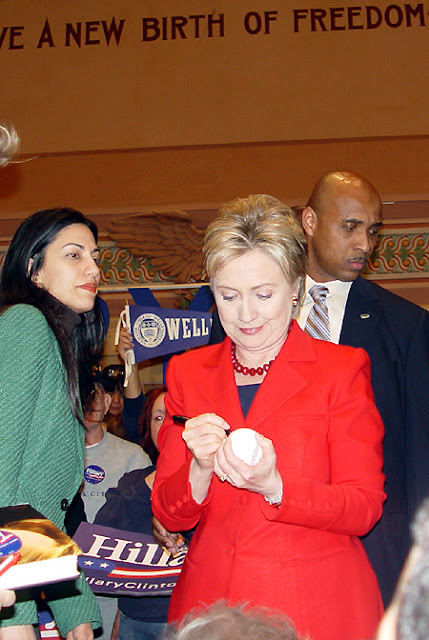 A photo I took on March 14, 2008, whilst standing mere feet away from Huma Abedin and Hillary Clinton

While Sen. John McCain (R-Ariz.) may have decried Rep. Michele Bachmann's (R-McCarthyville) baseless attacks on Huma Abedin -- a top aide to Secretary of State Hillary Rodham Clinton -- for having imaginary ties to the Muslim Brotherhood, Newt Gingrich has come to Bachmann's defense.

Bachmann has also accused the country's first Muslim congressman, Rep. Keith Ellison (D-Minn.), of being associated with the Muslim Brotherhood. Abedin has had to be placed under extra security after being threatened. And, Clinton's motorcade was pelted with tomatoes and shoes while in Egypt by crowds who bought into the claims by Bachmann and others of Obama Administration ties to the Brotherhood.

The one thing that jumps out at me from your link to a USAToday story mentioning how Bachmann is also targeting Keith Ellison is how Bachmann is second only to John Boehner in money raised (over some time period). There are a lot of nuts who agree with her.

I somehow got on her mailing list, and just the other week she sent out an email along the lines of:

"Are you getting my emails, cause you haven't given yet..."