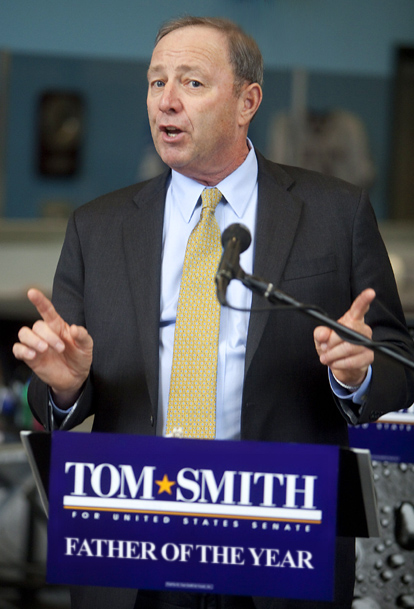 
MARK SCOLFORO, ASSOCIATED PRESS: How would you tell a daughter or a granddaughter who, God forbid, would be the victim of a rape, to keep the child against her own will? Do you have a way to explain that?

SMITH: I lived something similar to that with my own family. She chose life, and I commend her for that. She knew my views. But, fortunately for me, I didn’t have to.. she chose they way I thought. No don’t get me wrong, it wasn’t rape.

SMITH: Uh, having a baby out of wedlock.

SMITH: No, no, no, but… put yourself in a father’s situation, yes. It is similar. But, back to the original, I’m pro-life, period.

Where to start?
Having your daughter have a child "out of wedlock" is only similar to having your daughter have a child from being raped if you are a father who believes that your daughter is a mere extension of yourself. A father who would compare the two is a father whose only concern is the fact that his unwed daughter is visibly not a virgin and that that somehow reflects poorly on him. It springs from the same attitude as those who believe in honor killings. It springs from the same Christian Bible as the one that commands that a rapist must marry his victim...and pay the father fifty pieces of silver. It springs from a total lack of concern and any empathy for a woman's own experience, feelings and well being. It spews from an inability to see a woman as a person in her own right.
Smith is not the only PA pol to go into detail about a daughter's own private business to make a point on abortion. PA State Rep. Harry A. Readshaw (D, PA-36) was only too happy to let a constituent know that abortion wasn't fair because his own daughter couldn't give him a grandbaby. If these men had a uterus, they could stop using their daughters in their arguments and speak from their own experience. But they have no experience of their own -- just the power to use their own prejudices and religion to make laws that all women will have to follow.
It makes me sick.
By the way, this being Pennsylvania, his Democratic opponent, Sen. Bob Casey, is also anti abortion (he was one of only three Democratic US Senators to vote against killing the Blunt Amendment). But Bobby, at least believes that abortion should be allowed if a woman is raped or dying. That's a progressive Catholic in these parts.
All hail the American Taliban!
at 8/28/2012 06:28:00 AM

I believe the reporter who understandably could not keep a poker face during Smith's answers is Capitol Ideas' John L. Micek.

Hey, she did listen to his views on abortion at least! So she was a semi good little girl!