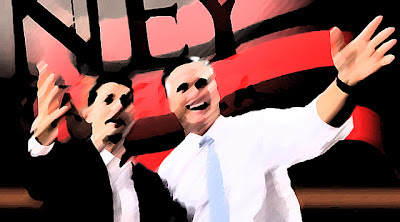 Meet Mitt Romney: Candidate for the 1%

One Pittsburgh hosts a public watch party of this year’s Republican National Convention speech by Mitt Romney, who will accept his nomination for President on Aug. 30 in Tampa Bay. The event will be in Schenley Plaza. There will be two 15 foot screens, one of the speech and one for commentary on the speech in real time.

This November, Americans will vote in an election that will affect us for generations to come. Will we end historic programs like Medicare and Social Security, and out vouchers in their place? Will we reinstate the Bush tax cuts or allow them to expire? Mitt Romney’s “Come Back Team” claims that Romney’s business background gives him the experience to put our economy back on track and deliver prosperity to all Americans. One Pittsburgh will offer educational games and live speech decoding to reveal the real Romney economics—tax breaks that never trickle down to the rest of us, cuts to education, health care and low –wage, no-benefit jobs

Pittsburgh – Thursday at 8pm, Pittsburghers will gather in Schenley Plaza – in Oakland – to meet Mitt Romney, candidate of the One Percent. Family friendly games like InSource/OutSource, Tug of War, Unlevel Playing Field, and Pin the Deficit on the Folks Who Made It provide a fun way to get the facts before listening to Romney’s acceptance speech. Pittsburgh workers from Dunkin’ Donuts and Burlington Coat Factory – both Bain companies that continue to build the Romney family fortune – are in Tampa right now to ask Mitt Romney to use his experience to help them get ahead. They’ll return for Thursday’s watch party to report what they learned and to predict the future of a Romney Economy from the point of view of those living in it now. When Romney takes the stage in Tampa, One Pittsburgh will be here in Pittsburgh to help de-code his speech and to offer a chance at a real dialogue with real people in real-time, on a split screen.