The Empire Strikes Back (or Tries To).

Posted by Dayvoe
Remember this from Thinkprogress?  It's about how Judicial Watch is at the forefront of the conservative push for "VoterID" laws and about how Richard Mellon Scaife has thrown serious amounts of money at Judicial Watch.

Well, now that the Pennsylvania State Supreme Court has issued its ruling, sending the case back to the Commonwealth Court, the Scaife braintrust responds accordingly:


Under the standard set by the state Supreme Court in remanding Pennsylvania’s contested voter ID law to Commonwealth Court, there never can be such a law in Penn’s Wood.

The high court, ruling 4-2 on Tuesday, gave Commonwealth Court Judge Robert Simpson until Oct. 2 to determine if the state is providing “liberal” access to new photo ID cards or if any voter will be unable to cast a ballot because of the voter ID law. (It was Judge Simpson who, in August, declined to enjoin the law’s implementation.)

But by the Supreme Court’s standard, any voter — perhaps someone who’s never voted and has no intention of voting but is recruited by any anti-voter ID sympathizers? — effectively can scotch the law.

The fix is in.

Yes.  They have it exactly right.  By making sure that no one (NO ONE) is disenfranchised by this law, "the fix is in."

They even try an old, unsupported attack:


Thus, the Supreme Court’s ruling is a poison pill bordering on a Hobson’s choice that will guarantee that elections in Pennsylvania will continue to be loosey-goosey affairs.

That's the case only if one assumes a reality that doesn't, in fact, exist.

Randy Bish even gets into the act: 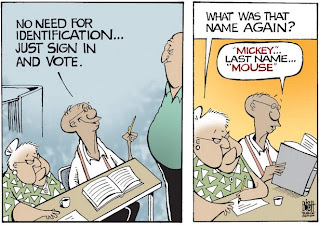 Um, do I need to remind my friends at the Trib that (as USAToday reported):

So when the braintrust posits a history of "loosey-goosey" elections in Pennsylvania or when Randy Bish raises the scary spectre of in person voter fraud in the future as a result of this ruling, they're just simply lying to you.