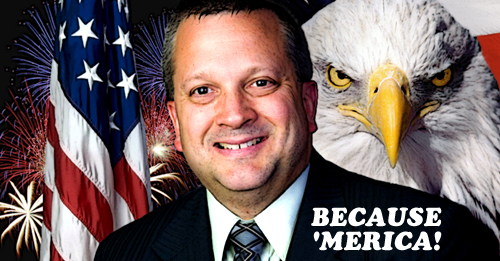 Pennsylvania State Rep. Daryl "I Don't Speak Mexican" Metcalfe (R-Pennsyltucky) is more 'Merican than you or I could ever hope to be! The man sweats red, white & blue! He's always busy keeping 'Merica for 'Mericans! His latest efforts occurred on Monday when according to Eat That, Read This (#275):


• Distended scumtroll Republican State Rep. Daryl Metcalfe, chairman of the House State Government Committee, denied colleague Rep. Leslie Acosta, "herself an immigrant and the state's only Latina legislator," her allotted speaking time as she "attempted to lay out her argument" against the shiteous English-only bill, interrupting her and then cutting off her microphone. Metcalfe, who is a white, straight, Christian human-shaped agglomeration of dog shit animatronically operated by a groundhog, used the same tactic against another minority colleague in 2013, when Gay Fantasy Boyfriend™ State Rep. Brian Sims attempted to speak "about the Supreme Court's gay marriage rulings," informing us that "his religious views against gay marriage compelled him to do it." Fuck Daryl Metcalfe.

But, True Patriot Metcalfe is even more 'Merican than stopping Latinas from speaking. According to Talking Points Memo, Metcalfe invited a white supremacist white nationalist to be a witness for his bill on Monday:


A Pennsylvania lawmaker objected to accusations that he had invited a white supremacist to testify in front of a committee by clarifying that the witness was merely a white nationalist.

The witness, Robert "Bob" Vandervoort, appeared at a hearing Monday on a bill to make English the official state language, the Patriot-News reported, prompting state Rep. Leslie Acosta (D) to allege that the committee had invited a white supremacist.

Metcalfe also said, "For whoever said the man was white to begin with, that person was actually the racist -- tying his skin color to his patriotism and what he stands up for for his country."

Yes, you say "to-may-toe" and I say "to-mah-toe" and Metcalfe says pointing out racism is racist!

And why is this post titled "Part II"? Because when Metcalfe is not busy inviting white supremacists white nationalists to speak (and shutting up Latinas and Gays), he is cavorting with people who call for elected Democrats to swing from ropes.

In 2010, he invited Jeff Lewis, national director, Federal Immigration Reform and Enforcement Coalition (FIRE), to stand with him at a press conference to promote PA House Bill 2479 which patterned itself after Arizona's controversial "Papers, Please" legislation. Here's the type of thing that Lewis writes:


Senate Majority Leader Harry Reid, House Speaker Nancy Pelosi, and other Members of Congress ignore the Constitution on a daily basis, and knowingly give support and comfort to special interest groups, foreign governments and the illegal alien insurgents they encourage to invade the United States, and betray everything their oath of office represents. Ask your governor, your federal and state judges why these traitors aren’t swinging from a rope? [Emphasis added]

Daryl Metcalfe should follow the example of Free Speech champion former Pittsburgh Police Officer and current House member Dom Costa.
http://www.ragingchickenpress.org/2015/04/21/pa-lawmaker-wants-to-make-it-a-crime-to-taunt-police-officers-because-feelings-may-get-hurt/
"This nonsense that is going today on where police officers are being taunted by people and being provoked, lets face it we’re all human beings, and eventually that emotion will break. And that’s what they’re trying to do. So, what I’ve talked to some of my colleagues and the senator [Senator Rafferty] is that we have a bill about taunting a police dog. It’s illegal. There should be out that you can’t taunt a police officer because you’re going to get those emotions up. I myself and Representative Vereb are looking at that bill to put it forward in the House, and I am sure the Senate will follow. Or at least support that bill."

Your "Look over there!" move is not correct behavior for a godly believer in the continuing validity of the Old Testament Law as the divinely-revealed standard for all societies. What you should have said is more like this: "Darryl Metcalfe is simply defending the right of the Christian majority to determine what language should be used in civil discourse. Since God in his providence provided us with his inerrant Word in English via the King James Bible, we ought to require everyone to know English so they can have direct, unfettered access to the Word of God."

Oh, in keeping w/ Old Froth's recommended way of dealing with your side-tracking, consider this as well: Barry Sanders leapt over a mortgage-backed derivative before the Chinese finished swirling bourbons.

WHen the chickens come home to roost, it is important to bleed the radiator.