Posted by Dayvoe
This won't be your usual Jack Kelly debunking, just letting you know up front.

Today, in the Post-Gazette, Jack Kelly informed the the public of this:


Every day this week I shaved, brushed my teeth, showered, dressed myself, made my own breakfast. Big steps for a recovering invalid.

I have multiple myeloma, a bone-marrow cancer. Just after I started chemo, I fell down the stairs and tore my left anterior cruciate ligament, complicating treatment for both.

For the last six weeks, I’ve essentially been confined to my bed, with another week or so to go. If you sent me an email, and I haven’t responded, this is why.

I was very sad to learn of Jack's diagnosis.  As you may recall from this blog, I lost my father a few years ago to a very quick and devastating cancer.  It wasn't multiple myeloma but what difference does that make?  It started as a tumor found on his right lung but it wasn't lung cancer.  The surgeons in New Haven successfully removed it but were never able to determine what sort of cancer it was.  For a number of years they monitored his status and he was fine.  Then in the space of about three months it took him.  Quickly.  And with a vengeance.

So it's more or less a completely different story from Jack's but what difference does that make?

It was cancer and cancer can be devastating.  I've watched in quiet awe (via facebook) a woman I barely knew in high school battle (and beat back) her own cancer with Asgardian-sized courage.  Takes a lot to face it.  My hat's off to anyone (INCLUDING YOU, JACK) who's looked into that abyss.

But Jack, that doesn't mean you get a pass when you try to misinform your readers.  You still own what you've written and it's still misleading.


The president said Obamacare would reduce unsubsidized, employer-based health-insurance premiums by $2,500 a year, and since 2008 the growth in premiums has slowed, but the average family premium still has risen $4,865, according to the Kaiser Family Foundation.

First, there's this from Politifact:


When it came to health care premiums for the typical family, Obama said he would cut the annual cost by $2,500. Months before Obama took office, a New York Times reporter dubbed it one of the most audacious pledges of the campaign.

We reached out to David Cutler, an economist who advised Obama during the 2008 campaign and helped calculate the $2,500 figure that appeared in Obama's speeches. He said the calculation encompassed total health care costs, not just premiums. These would include out-of-pocket costs, employer-provided insurance costs, and taxes to pay for public insurance programs.

Cutler acknowledged that Obama made "occasional misstatements” that tied the $2,500 reduction to premiums and not total medical spending.

That was written 3 years ago.  So why use the point now?  If only to evade the reality of the situation, I guess.

But let's look at the other side of the sentence - the growth of the premiums.  Here's what Kaiser wrote about three weeks ago:


Single and family premiums for employer-sponsored health insurance rose an average of 4 percent this year, continuing a decade-long period of moderate growth, according to the Kaiser Family Foundation/Health Research & Educational Trust (HRET) 2015 Employer Health Benefits Survey released today. Since 2005, premiums have grown an average of 5 percent each year, compared to 11 percent annually between 1999 and 2005.

There's more from the Kaiser survey itself: 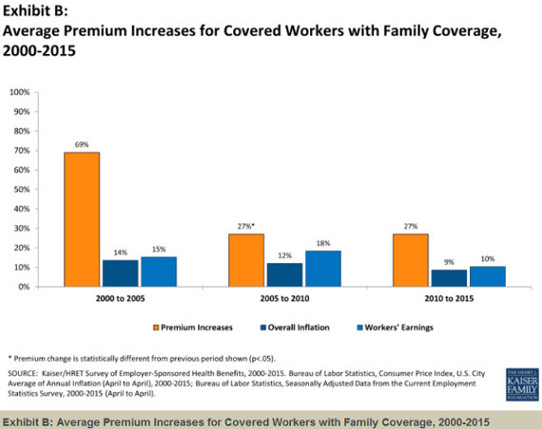 Wait, wait, doesn't this mean that while yes the premiums have gone up, they probably would've been higher without Obamacare?

And if you look carefully at Jack's sentence above, he actually affirms that (or at the very least that "the growth in premiums has slowed").  It's hidden in all that anti-Obamacare stuff.  Huh.  Interesting.

And then look at what he writes later:


The first steps to giving more Americans access to quality care are to repeal Obamacare...

Which would of course would hit the deficit hard, according to Politico:


A new cost estimate from the Congressional Budget Office underscored the magnitude of the task: The budget scorekeeper last Friday said a full Obamacare repeal would add $353 billion to the deficit over the next decade.

I thought conservatives were against doing stuff that would raise the deficit.  I guess it's OK if the cost of it comes from actually helping people who otherwise couldn't afford health care to get health care.

So Jack I am very sorry to hear about your health issues.  No one should have to face what you're facing.  But you're still spinning Obamacare in a way that does no favors to your readers or the public at large.
at 10/04/2015 11:48:00 AM