Posted by Dayvoe
This "birthday" stuff is fun.  I may continue for a month or so.

In 1933, She was the first African-American soloist to perform with the Chicago Symphony Orchestra.


Margaret Allison Bonds was born in Chicago on March 3, 1913. Her father was a physician. Her mother, whose maiden name Bonds used throughout her career, was an organist and music teacher who often opened her home to the black musical luminaries of the day, including the orchestra leader and musical theater composer Will Marion Cook, and the pioneering classical composer and pianist Florence B. Price. Margaret Bonds got an early start in music, finishing her first composition at age five. In high school she studied with Price and with another giant of early African-American concert music, the composer and conductor William Dawson.

It didn’t take Bonds long after graduating from high school to make her mark on the classical musical world. Not yet 20 years old, she won the national-level Wanamaker Foundation Prize for her composition “Sea Ghost,” a song for voice and piano. At the 1933 Chicago World’s Fair, she played the piano part in Price’s Concerto in F Minor for piano and orchestra, and she became the first African-American soloist to appear with the Chicago Symphony Orchestra (Price’s piece was the first orchestral work by an African-American woman that the orchestra had ever performed). Bonds went on to earn bachelor’s and master’s degrees in music from Northwestern University in 1933 and 1934.

In the early 40s, she set "The Negro Speaks of Rivers" by Langston Hughes.  Here it is: 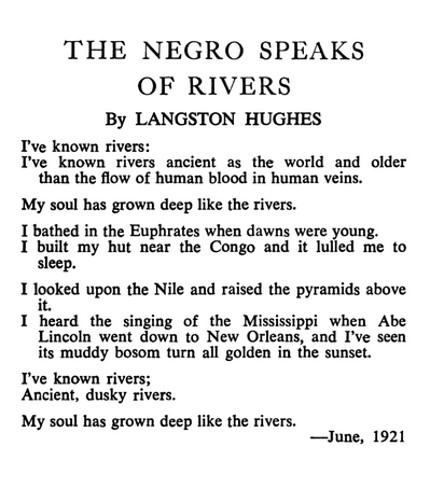