Posted by Dayvoe
Today is March 6.  And I would have to turn in my Double Secret Italian-American membership card if I didn't mention that today marks the anniversary of Michelangelo's birth.

I also have to include him because I was named after this: 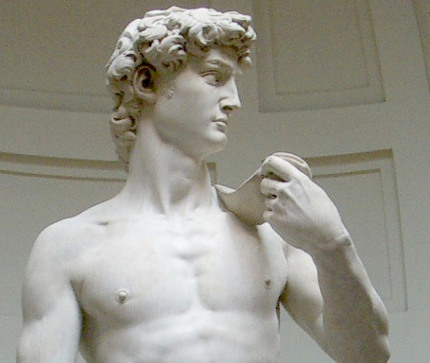 And for those of you know know me, I am sure you'll spot the resemblance - the nose, the hair, the pecs - almost immediately.

Here she is giving a TED Talk:

She also came up with this, The Day The Earth Smiled.  This is what she wrote beforehand:


Something great, something big, something very special that's never happened before is about to happen!

On July 19, 2013, the Cassini spacecraft, currently in orbit around Saturn, will be turned to image that planet and its entire ring system during an eclipse of the sun, as it has done twice before during its previous 9 years in orbit.

But this time will be very different. This time, the images collected will capture, in natural color, a glimpse of our own planet alongside Saturn and its rings on a day that will be the first time the Earth's inhabitants know in advance their picture is being taken from a billion miles away.

She suggested that at that point, each of us go outside and:


...gather together with friends and family, contemplate the utter isolation of our world in the never-ending blackness of space, relish its lush, life-sustaining beauty, appreciate the rarity it is among the Sun's planets, and marvel at your own existence and that of all life on planet Earth.

And then, by all means, rejoice! Hoot and holler, twist and shout, raise a glass, make a toast, dance beneath the diamond sky with one hand waving free, or celebrate in silence. Whatever it takes. But be sure to smile, knowing that others around the world are smiling too, in the sheer joy of simply being alive on a pale blue dot.


And this is the picture that was taken: 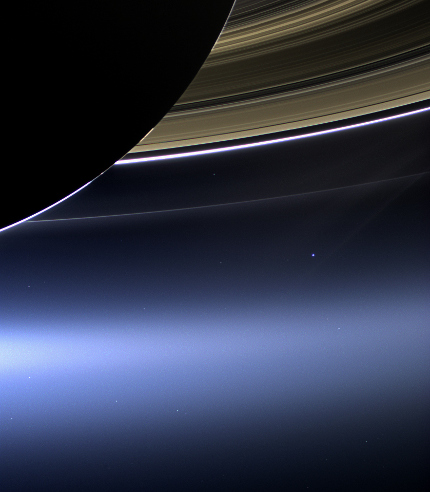 That curve in the upper left hand of the picture is Saturn, seen from behind during the eclipse.  The yellowish lines that fill up the top part of the picture are Saturn's rings.  And that dot, just to the right of center, about half way down, between the faint line above it and the grey-ish "cloud" below?