March 8 - Birthdays (and Such)

Posted by Dayvoe
Today is the day, in 1618, that Johannes Kepler discovered his third law of planetary motion. He notated it in his book, Harmonices Mundi. Here's the law, as translated into English:


The square of the orbital period of a planet is directly proportional to the cube of the semi-major axis of its orbit.

And it's the most beautiful bit of science I think I've ever read.  NASA has a chart explaining what's going on: 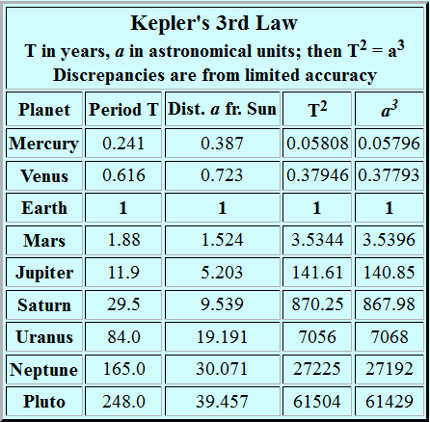 The cool part can be found by comparing the last two columns - they're more or less the same.  It's so simple, it's beautiful.

Carol Bayer Sager was also born today.  If you don't know her name, perhaps you'll know what she had a hand in writing:

The Chart is wrong!!!!1! According to SCIENCE! high lord pope Neil Degrasse Tyson Pluto is not a planet.