Posted by Dayvoe
I spent Thanksgiving on Long Island (burp) and then I made a pilgrimage to Trump's gross, gilded tower where took this pic: 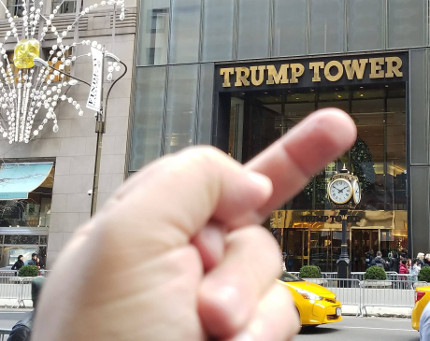 In my defense I point out what the Constitution says here:


Congress shall make no law respecting an establishment of religion, or prohibiting the free exercise thereof; or abridging the freedom of speech, or of the press; or the right of the people peaceably to assemble, and to petition the Government for a redress of grievances.

And to this far far greater president (and far far better man) than Donald Trump:


The President is merely the most important among a large number of public servants. He should be supported or opposed exactly to the degree which is warranted by his good conduct or bad conduct, his efficiency or inefficiency in rendering loyal, able, and disinterested service to the Nation as a whole. Therefore it is absolutely necessary that there should be full liberty to tell the truth about his acts, and this means that it is exactly necessary to blame him when he does wrong as to praise him when he does right. Any other attitude in an American citizen is both base and servile. To announce that there must be no criticism of the President, or that we are to stand by the President, right or wrong, is not only unpatriotic and servile, but is morally treasonable to the American public. Nothing but the truth should be spoken about him or any one else. But it is even more important to tell the truth, pleasant or unpleasant, about him than about any one else.

Good thing a NYPD officer did not take your gesture as disrespecting him instead. They do not like as they call it such Constitutional BS.