The State Republican Party Is Lying About Conor Lamb

Posted by Dayvoe
Yea, I know - what a surprise!!

It's in the return address: 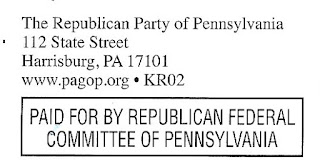 And what sort of statewide dishonesty has been aimed at Representative Lamb?


Dangerous for Seniors: Lamb supports a dangerous and radical healthcare plan which robbed over $800 billion from our Medicare program.

With a footnote that leads you here to The Beaver County Times. So, let's go see what The Times had to say about Conor Lamb and healthcare, shall we?

[Message to my new friends on the "Republican Federal Committee of Pennsylvania": Did you think no one would check?]

Here's what was published:


Lamb said he “fully” supports the Affordable Care Act, also known as Obamacare, because it provided insurance to millions of Americans who would not otherwise have coverage. He said the individual mandate, which Republicans repealed under President Donald Trump, was “a very important ingredient” in the ACA.

Also, Lamb said the government should do more to market and recruit Americans into ACA plans, yet the Trump administration has done the opposite. Asked specifically about Medicare for all, Lamb said expansion could cost $3 trillion and he has not seen a plan to pay for it.

“I support ideas that we know we can pay for,” he said.


Look closely at the text - look at what it says and, just as importantly, what it doesn't say. If the committee is talking about Lamb's support of Obamacare, why not just say "Obamacare" instead of "a dangerous and radical healthcare plan"? What are they hiding by the ad hoc relabeling?

The simplest theory is that they simply don't want you to think they're talking about Obamacare (which, according to the Kaiser Foundation is still popular as it has, at this point, a 50% to 40% favorable to unfavorable rating) but about some other healthcare plan (a scary one!) - that has already robbed Medicare of $800 billion. So first, we have a lie of omission.

And what about that second part? Has the ACA actually robbed hundreds of billions from Medicare?

No - this is another lie from our Republican friends. Take a look at this from Glenn Kessler at the Washington Post. The Lamb ad echoes another campaign ad from the beginning of August. That ad states that Daniel O'Connor (who's running against Troy Balderson in Ohio):


...supports a Pelosi-backed plan that cuts Medicare spending by $800 billion.”

Kessler says that he looked at this issue way back in 2012 when he wrote:


This $700 billion figure comes from the difference over 10 years (2013-2022) between anticipated Medicare spending (what is known as “the baseline”) and the changes that the law makes to reduce spending. The savings mostly are wrung from health-care providers, not Medicare beneficiaries — who, as a result of the health-care law, ended up with new benefits for preventive care and prescription drugs. [Emphasis added.]

And then as a follow-up he writes about the current GOP distort:


A Congressional Leadership Fund official acknowledged that the [O'Connor] ad was referring to the Medicare savings in the ACA, using numbers produced by the Congressional Budget Office in 2015 about the impact of repealing the law.

“The provisions with the largest effects reduced payments to hospitals, to other providers of care, and to private insurance plans delivering Medicare’s benefits, relative to what they would have been under prior law,” the CBO said in a report. “Repealing all of those provisions would increase direct spending in the next decade by $879 billion.” (The report also said repealing the law would increase the budget deficit over 10 years.) [Emphasis added.]

Hence, the "over $800 billion" from the Lamb ad. Since Democrats don't want to repeal the ACA, an repeal which would reverse the reduction of Medicare savings of $800 billion, the GOP is asserting that the Democrats want to "rob" Medicare of that $800 billion. See how the GOP "logic" works?


“There were about $540 billion of Medicare cuts assumed in the House budget that passed committee,” said Marc Goldwein, senior vice president at the nonpartisan Committee for a Responsible Federal Budget. “And the president’s budget has something like $350 billion of net Medicare cuts (actual number is larger in part because they move some programs out of Medicare). Those are all on top of the cuts we passed years ago under the ACA.”

I'll reduce it to a moderately short sentence: Conor Lamb wants to protect $800 billion in savings to Medicare and the GOP says that means that he wants to rob Medicare of that amount. Despite the fact that the GOP wants to cut Medicare funding even more.