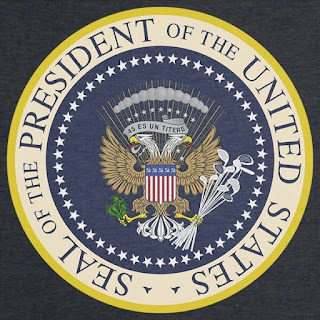 Notice the golf clubs and cash.

In case you missed it, here's the story:


President Trump stood in front of a fake U.S. presidential seal before giving a speech in front of supporters in Washington D.C. on Tuesday. The sign resembled the official Russian coat of arms and contained other subtle shots at the commander in chief.

As Mr. Trump was being introduced at a teen summit hosted by conservative group Turning Point USA earlier this week, the altered presidential seal popped up next to him onstage. Instead of arrows and olives branches clutched in their talons, a closer look reveals two eagles holding a set of golf clubs on one side and a pile of cash on another.

Proof for the Trumpers out there: 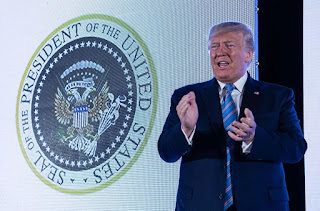 This would be the same summit where Trump asserted (incorrectly, of course) that Article 2 of the Constitution gave him the authority to "do whatever I want as president."