It ends with this sentence:


There was no persuasive evidence of systemic, deliberate mishandling of classified information.

How many times have we since been told, in effect, that there is no there there?

Instead we have this tweeting from The White House. 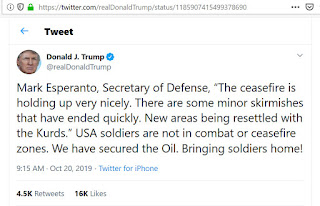 Excellent that means the Secretary of State and Trump family can set up and use their own private FOIA dodging email server.