This Is The Oath Senator Pat Toomey Took

Posted by Dayvoe
This happened a few minutes ago:


In a ceremony that has happened only twice before in the nation’s history, Chief Justice Roberts took an oath that dates to 1798.

The oath was administered by Senator Charles Grassley of Iowa: “Do you solemnly swear that in all things appertaining to the trial of the impeachment of Donald John Trump, president of the United States, now pending, you will do impartial justice according to the Constitution and laws: So help me God.”

Chief Justice Roberts said: “I do.”

He then delivered it to the senators themselves, asking them to stand while they made their vow.

The senators were then called in groups of four to sign the oath book.

And here is Pennsylvania Senator Pat Toomey signing the book after taking the oath: 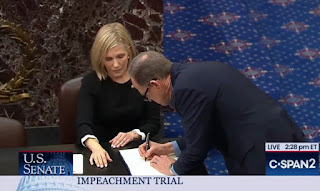 We already know, by their previous assertions, that Senators McConnell and Graham have already broken the oath.

Jennifer Lawrence said...
This comment has been removed by a blog administrator.
January 22, 2020 at 9:20 AM