Posted by Dayvoe
According to the science at NOAA:


The global land and ocean surface temperature for January 2020 was the highest in the 141-year record, with a temperature departure from average of 1.14°C (2.05°F) above the 20th century average. This value was only 0.02°C (0.04°F) higher than the now second highest January temperature departure from average set in 2016. The four warmest Januaries on record have occurred since 2016, while the 10 warmest Januaries have occurred since 2002.

And here's a chart for those who wish to see one: 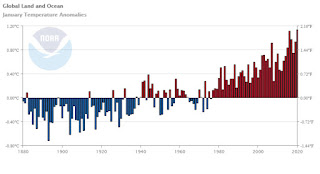 See that last column on the far right? That's where we are right now.

Last night, on 60 Minutes, there was a segment on the wildfires now burning in Australia.

Which, of course, triggered the denialists on twitter with tales of Australian arsonists.

@60Minutes How about u mention the arsonists who STARTED THE fires in Australia!!!!! #lies #60minutes #falsenarrative
— Capt. M. J. Hight (@Maineseacaptain) February 17, 2020

Except, of course, it's the "arson is the cause" that's the false narrative here.


The fact is, hot, dry conditions allow for bushfires to escalate, regardless of how they are started. As we explained in 2017, in a story about wildfires in the western U.S., climate change doesn’t cause these fires, but it can exacerbate the hot and dry conditions that make wildfires more likely to develop and grow.

That first link leads to this article by the Australian Academy of Science and these few sentences:


An increase in warmer and drier weather means a higher number of days of high or extreme fire risk. Indeed, we’ve already seen an increase in high and extreme risk days in Australia over the past four decades. Along with more days of higher risk, climate change will also bring an extension of the fire season.

A: Scientists, both those who study fire and those who study climate, say there’s no doubt man-made global warming has been a big part, but not the only part, of the fires.

Last year in Australia was the hottest and driest on record, with the average annual temperature 2.7 degrees Fahrenheit (1.5 degrees Celsius) above the 1960 to 1990 average, according to Australia’s Bureau of Meteorology. Temperatures in Australia last month hit 121.8 F (49.9 C).

“What would have been a bad fire season was made worse by the background drying/warming trend,’’ Andrew Watkins, head of long-range forecasts at Australia’s Bureau of Meteorology, said in an email.

Mike Flannigan, a fire scientist at the University of Alberta in Canada, said Australia’s fires are “an example of climate change.”

A 2019 Australian government brief report on wildfires and climate change said, “Human-caused climate change has resulted in more dangerous weather conditions for bushfires in recent decades for many regions of Australia.”