Posted by Dayvoe
In the US House of Representatives, the representative from PA-17 (where I live) is Congressman Conor Lamb.

He's the guy who beat Rick Saccone a while back, in case you've forgotten. As far as I can tell, he's a center-left/centrist Democrat. Contemporary politics being what it is, of course, the Trumper's think he's a flaming liberal who's to blame for everything including the kidnapping of the Lindbergh baby.

A real American must be found to save us from the socialist scourge!! (Lamb actually reached the rank of Major in the USMC reserves, BTW. Just so you know.)

Enter, in a most peculiar way from stage far-far right, Sean Parnell. The story begins last October when the orange vulgarity himself was speaking at an energy conference in Pittsburgh. This is how the P-G saw it:

Speaking Tuesday night at the Allegheny County Republican Committee, Mr. Parnell said he had no idea how Mr. Trump knew his plan or that the president was going to make it public.

Timing is everything, they say. 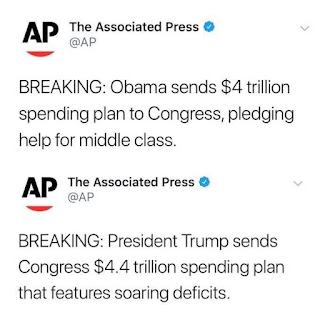 Too bad Sean didn't do his homework on this. You'll see why in a minute.  Perhaps he did. But IF he did, then he's actively lying (by omission) with his many FB friends. So let's just assume for the sake of civility that he's just sloppy and careless and NOT outright dishonest.

Everyone cool with that?

To look at it, Parnell's saying that the media is so biased that presented with the exact same picture (a president presenting a $4 trillion budget proposal to Congress) of two different presidents (one a Democrat the other a Republican) the media can't help but trash the Republican.  However by coming conclusion with just the headlines, Sean's left out some very important info: the details of each budget proposal, for example.

I googled each headline above and found that the former is from February, 2015 and the latter from about three years later.

This is what the NYTimes had to say about the Obama budget proposal in 2015:

And this is what the NYTimes said of the Trump budget proposal in 2019:


The White House budget request would add $984 billion to the federal deficit next year, despite proposed cuts to programs like Medicare and food stamps and despite leaner budgets across federal agencies, including the Environmental Protection Agency.

So which one had those "soaring deficits"?

Now go back and look at what Sean Parnell presented to his FB friends.

It's still early in the campaign, so I'll leave it to you to decide whether Sean Parnell was sloppy or dishonest.