Candidate Sean Parnell's FIRST Ad! (And Some Stuff He Failed To Mention) UPDATED

Posted by Dayvoe
Well, Candidate Sean Parnell's got his first ad out - and it's a doozy.
I took the liberty last night to transcribe the ad - and while it's your typical snarky underdog GOP political ad, it's surprising how much important stuff Sean decides to leave out for you, the voting public.
He spends an awful lot of time trying to tie Rep Conor Lamb's record to Speaker Pelosi - with the idea, I suppose, that if he smears her, he's smearing Lamb (since Lamb and Pelosi are buddy-buddy, you know).
And that's where he trips up. For example he says:

And Nancy Pelosi's biggest supporter is my opponent, Conor Lamb.

But he leaves out that Lamb voted against Pelosi as speaker - both in November, 2018

Democrat Conor Lamb says he didn't vote for Pelosi in caucus today and will not do so on the floor in January pic.twitter.com/uw7aMlHnY7

And in January, 2019.
If Sean Parnell is going to be honest with his supporters, he will have to explain how Speaker Pelosi's "biggest supporter" voted against her being speaker - twice.

Sean? Anytime you wanna explain the dissonance, I'll give you the floor.

Then there's this about Speaker Pelosi:

She spent a global pandemic impeaching our president...

This is simply gaslighting on Sean's part. The vote for the articles of impeachment occurred on December 18, 2019. The Wuhan Municipal Health Commission didn't report their first cases of a "pneumonia of unknown cause" until two weeks later on December 31, 2019.

By the time the Republicans in the Senate gave Trump a pass on the abuse of power and obstruction of Congress it was February 5, 2020. Trump had taken the step of restricting travel from China of anyone who'd been there in the previous 2 weeks (January 31, 2020) but this is more than a month before he blocked all visitors from Europe (March 11, 2020) or declared a National Emergency (March 13, 2020).

In between, he downplayed the severity of the virus.
Then there's this from Business Insider (dated March 31, 2020):

As President Donald Trump faces criticism from public health experts and lawmakers over his lack of preparation for the coronavirus pandemic, his Republican allies have argued the president was too distracted by impeachment to focus on the spread of the virus.

"It came up while we were tied down in the impeachment trial. And I think it diverted the attention of the government because everything every day was all about impeachment," Senate Majority Leader Mitch McConnell said in a Tuesday interview.

But Trump was not too distracted to go golfing or hold campaign rallies during the impeachment trial, as he simultaneously downplayed the threat of the virus and told Americans everything was under control. [Emphasis added.]

(Note the date, Sean. This "he was distracted by the Impeachment story is stale. You really should try to be more up-to-date with your smearing).

If Sean Parnell is going to be honest with his supporters, he's going to have to explain how the Impeachment, which ended on February 5, got in the way of Trump's mismanagement of the response to Covid-19. He only announced a national emergency in mid-March. Up until that point, as I said, he downplayed the severity of the crisis.

But Sean, now that you've tied yourself to the legacy of Donald J Trump, there's one thing you definitely left out of your ad: The 115,000 dead US citizens - thousands of whom are dead because of Trump's mismanagement.

Do you really want to tie yourself to a man who brought about so much misery?
Your call.

UPDATE:  Part of Parnell's criticism of the Democratic Party is that "This crazy old socialist" (meaning Senator Bernie Sanders) was almost their presidential nominee.

Look closely at the picture. 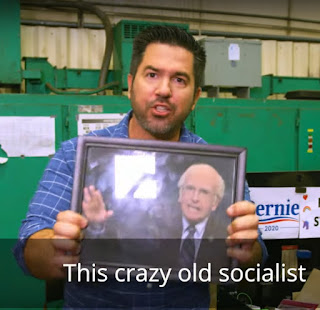 Sean really needs to do his homework better or next time he'll be holding up this picture of Donald Trump: 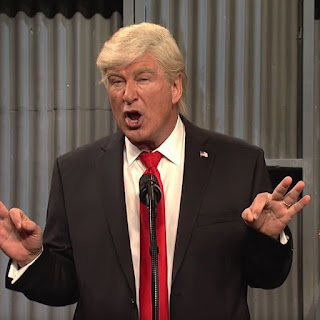