KDKA Radio's Wendy Bell Is On The Wrong Side Of This Story. (Yea, I'm Just As Shocked As You Are!)

Posted by Dayvoe
Did you happen to catch this story?

A video featuring a group of doctors making false and dubious claims related to the coronavirus was removed by Facebook, Twitter, and YouTube after going viral online Monday.

The video, published by the right-wing media outlet Breitbart News, featured a group of people wearing white lab coats calling themselves "America's Frontline Doctors" staging a press conference in front of the US Supreme Court in Washington, DC.

Of course, KDKA Radio's Wendy Bell sees it a little differently. to her, it's not about truth. It's about censorship: 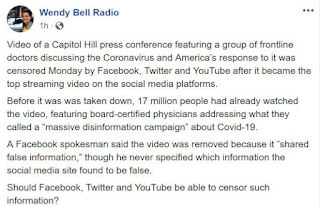 Unsurprisingly, Wendy was not entirely accurate with what the Facebook spokesman said. From this Yahoo piece, we find this tweet:

Yes, we removed it for sharing false information about cures and treatments for COVID-19.

Should these social media platforms be able to censor such information?

If the information is false, presented to the public as scientific/medical fact and could lead to lotsa people becoming sick, then hell, yea.
From the NYTimes:

“Misinformation about a deadly virus has become political fodder, which was then spread by many individuals who are trusted by their constituencies,” said Lisa Kaplan, founder of Alethea Group, a start-up that helps fight disinformation. “If just one person listened to anyone spreading these falsehoods and they subsequently took an action that caused others to catch, spread or even die from the virus — that is one person too many.”

But then again, this is Wendy Bell we're talking about here. KDKA Radio's Angel of Death thinks we'd all be better off if everyone got the virus as it'll bring about "herd immunity" (forget about the hundreds of thousands who'd have to die in the process).
But let's fact-check some of the claims of this video:
Hydroxychloroquine is not a treatment for Covid-19:

FDA has concluded that, based on this new information and other information discussed in the attached memorandum, it is no longer reasonable to believe that oral formulations of HCQ and CQ may be effective in treating COVID-19, nor is it reasonable to believe that the known a nd potential benefits of these products outweigh their known and potential risks.

Wearing a mask in public is a good idea:

COVID-19 spreads mainly from person to person through respiratory droplets produced when an infected person coughs, sneezes, talks, or raises their voice (e.g., while shouting, chanting, or singing). These droplets can land in the mouths or noses of people who are nearby or possibly be inhaled into the lungs. Recent studies show that a significant portion of individuals with COVID-19 lack symptoms (are “asymptomatic”) and that even those who eventually develop symptoms (are “pre-symptomatic”) can transmit the virus to others before showing symptoms.

To reduce the spread of COVID-19, CDC recommends that people wear cloth face coverings in public settings when around people outside of their household, especially when other social distancing measures are difficult to maintain.

Then there's the credibility of the group, America's Frontline Doctors.
From CNN:

According to the website for America's Frontline Doctors, the group is led by Dr. Simone Gold, a Los Angeles-based emergency medicine specialist who has previously been featured on Fox News for her views that stay-at-home orders are harmful. Gold told the Associated Press in May she wanted to speak out against stay-home orders because there was "no scientific basis that the average American should be concerned" about Covid-19.

So we can see why KDKA Radio's Angel of Death would be pushing for this group.
Then there's Dr Stella Immanuel herself. This from The Daily Beast:

Before Trump and his supporters embrace Immanuel’s medical expertise, though, they should consider other medical claims Immanuel has made—including those about alien DNA and the physical effects of having sex with witches and demons in your dreams.

Immanuel, a pediatrician and a religious minister, has a history of making bizarre claims about medical topics and other issues. She has often claimed that gynecological problems like cysts and endometriosis are in fact caused by people having sex in their dreams with demons and witches.

She alleges alien DNA is currently used in medical treatments, and that scientists are cooking up a vaccine to prevent people from being religious. And, despite appearing in Washington, D.C. to lobby Congress on Monday, she has said that the government is run in part not by humans but by “reptilians” and other aliens.

What does he say about the use of masks in public? About hydroxychloroquine as treatment of Covid-19? About the need for everyone to get infected so that we'll have herd immunity?

And please let us know what he says.

The health and well-being of many members of your audience may depend on it.