Posted by Dayvoe
On Friday, KDKA Radio's very own Angel of Death (Wendy Bell) used some incomplete numbers to reassure her adoring fans that schools are indeed safe for kids and that there's little, if anything, to worry about in reopening the schools for them this fall.
Indeed, sez Wendy, the people who rely on "science" and "numbers" to help with their decisions are going to get it wrong because they're using the wrong numbers.
By the way, this is what Wendy Bell looks like when she's ridiculing other people's numbers. Those are her irony air quotes. 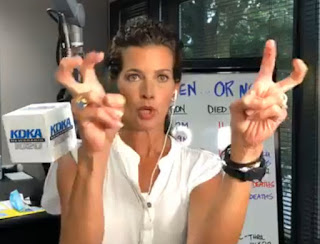 Wendy Bell's air quotes
Unfortunately, it's Wendy whose numbers are wrong (or at least grossly incomplete). And in doing so (as in everything else she does), she's giving her audience a false sense of security regarding Covid-19

Given the high stakes this is, to say the least, dangerous and irresponsible.
This is what Wendy does - she finds some demographic numbers here at kids count [dot] org. It's a distribution of how many five to fourteen year-olds are there in the United States, how many fifteen to twenty-four year-olds are there and so on. She then maps those groupings onto the CDC mortality numbers for each group.

It's not a big deal for your final point, Wendy, but if you're claiming to have "the real numbers" you really should make sure that what you say on air faithfully represents what your source says.

Kinda makes your research sloppy when you get simple stuff like this wrong.

In any event, Wendy boils all those numbers down to this factoid: there have been only 226 deaths from Covid-19 out of a total population of about 103 million student aged (0-24 years) Americans.

That's the beginning and end of her "See? it's safe to reopen schools!" argument (she throws in some "seasonal flu" statistics for old times sake, too).

Here's what she leaves out (and this is the dangerous part):
Important stuff, right?
I am wondering if Wendy bothered to look into each idea. If she did, perhaps she missed this from The New York Times:

In the heated debate over reopening schools, one burning question has been whether and how efficiently children can spread the virus to others.

A large new study from South Korea offers an answer: Children younger than 10 transmit to others much less often than adults do, but the risk is not zero. And those between the ages of 10 and 19 can spread the virus at least as well as adults do.

The findings suggest that as schools reopen, communities will see clusters of infection take root that include children of all ages, several experts cautioned.

See that, Wendy? If you chose to limit the discussion to the worst case scenario (deaths among student age people), you can effectively avoid any discussion of how, say, high schoolers can transmit the virus to others who may then get sick and die.
Then there's the damage that the virus can do to the very young:

Two new studies released this week shed some light on how a rare but potentially deadly syndrome affects children exposed to COVID-19.

The studies, one of which was led by Boston Children's Hospital, were both published in the New England Journal of Medicine. Researchers found that the coronavirus-related illness known as multi-system inflammatory syndrome, or MIS-C, appeared to be caused when a child's immune system overreacts to the virus and inflames other systems in the body.

Did you miss this one, Wendy? There was no mention of it to your fans.
Each of these is what's known as a sin of omission. You only tell part of the truth and in doing so you're giving your audience a flawed picture of reality.
Did you know about these studies and yet chose not to inform your audience about them? Or did you not do the research needed to find them?

In either case, you're misleading your fans, Wendy. And as a result some of them may get sick.

I'll ask it again, how are you OK with this?

And I'll ask KDKA Radio the same thing: How are you OK with Wendy Bell putting her listening audience at risk but giving them incomplete or flawed information regarding Covid-19?

This is not a matter of opinion. The public health depends on it.