Does Sean Parnell Denounce or Endorse ALL of Donald Trump's Misdeeds?

GOP House candidate Sean Parnell posted this this weekend (he's referencing a video he posted a while back on Facebook).

I filmed this a month ago. The Pittsburgh Post-Gazette wrote 2 articles critical of me (but not the mob). 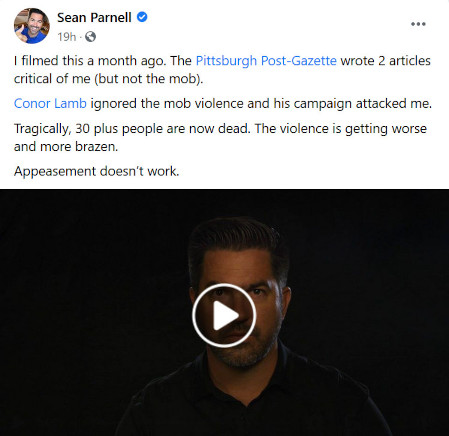 There are two pieces in the P-G regarding that video. One article's is an analysis of the add and the second is actually an editorial and thus not technically an "article."

It's surprising to me, Sean, that you saw Julian Routh's analysis of your ad as critical. It may have been tough but it was hardly unfair. Routh doesn't actually criticize you in the piece. You see that, right? He does, however, quote people who do.

And this is about as critical as it gets:

In interviews this past week, local political analysts and academics, including one who studies public monuments and another who examines grassroots organizing and its historical implications, deemed the candidate’s rhetoric intense in its voracity, a near-copy of the president’s recent playbook and a vapid and insincere interpretation of a more complex series of movements.

Kirk Savage, a professor of history of art and architecture at the University of Pittsburgh who studies the identity and memory of public monuments, said he’s amazed that the tearing down of statues has triggered this rhetoric, and that over the past several weeks, there have only been a “few high profile take-downs” of monuments. Thousands and thousands of statues remain standing, Mr. Savage said.

“This is a tiny, tiny fraction of them, and much of the [protesting] … most of it has been quite peaceful,” Mr. Savage said, adding that “there are more statues being removed by civic processes than there are by mob or vigilante groups.”

That's it. If that's got your feathers in a flurry...

The editorial a few weeks later, however, was critical of you, although it does also criticize "the mob" a tad (as small and driven by emotion - did you miss it?)

In it, you are being criticized for being polarizing:

There is a mob out there. But they are a relatively small number of people, driven by emotion. An equally emotional response to them fixes nothing, builds nothing, helps no one.

It all leads me here: Let's side step if and continue with your argument, "if you don't denounce something, you endorse it."

Ok, let's do a simple one. Do you denounce Donald Trump's use of tear gas on a group of US citizens exercising their 1st Amendment rights just so that he can have a photo op outside a church? Remember, if you don't denounce it, you've endorsed it.

Or this? Do you denounce Donald Trump's mishandling of the government's response to the COVID-19 outbreak? One that's led to tens of thousands of necessary dead Americans?